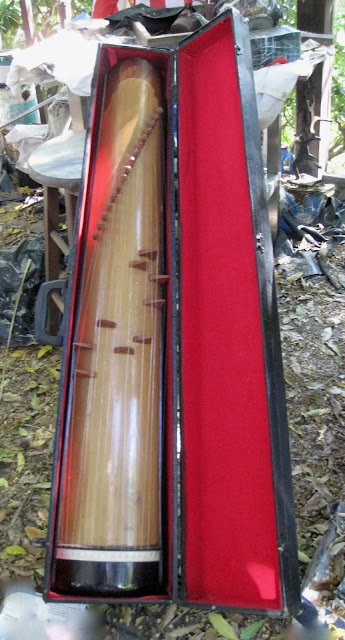 Thanks to producer / LAWTF co-founder Adilah Barnes for a most unique evening of theatre. For more information about the workshops and activities of LAWTF go to  http://www.lawtf.org/ and support these dedicated artists.
Michael Sheehan
onstagelosangeles
Posted by Sheehan at 1:46 AM No comments:

It's a long way to go to tell the old Bible story of the wisdom of Solomon. What Bertolt Brecht has done in one way or another with most of the many plays he's written has been to set a standard for production that makes the show itself not just a play.. not just a few hours in a dark space with a story, but a polemic .. the undercurrent of the times.. the strong cast of characters.. and Anteaus's cast of thousands.. well.. a few dozen played with aplomb by sixteen protean professionals... starts with a preshow that sets the tone for putting on a play!

"We'll put on a play!" exclaims John Apicella as an Expert who is responding to a situation in a mythical village in the Caucasuses.  The play will be called..  "The Caucasian Chalk Circle!"

Brecht's telling   of the chalk circle reportedly goes back to an ancient Chinese tale that echoes the Bible telling of Solomon and the two mothers.  What Brecht does and has done and Antaeus does  beautifully is to expand the idea of positive political action as well as revealing wrong doing in nations and in courts with a polemic that speaks directly to what the United States is experiencing today. Corruption and rule by force all come to light with a slight tongue in cheek while our sixteen actors interchange  characters on the fly.

The ever moving basic set pieces by Frederica Nascimento and Erin Walley's props work beautifully. Scenes evolve smoothly as the characters all change,  accompanied by actor/musicians on a multitude of odd instruments to uplift each scene. I particularly liked Apicella's banjolele.

Brecht drops the fourth wall and makes no bones about keeping us informed that this is not just a show but an examination of ideas dramatically expanded.  The acting is sometimes deliberately slightly off kilter or maybe that actor has not fully engaged with his role? Regardless, it's a play: a theatrical. It's transformational and current. Stephanie Shroyer's direction is so smooth that the ensemble seems to guide itself through the paces!

Played with a particularly casual quality, Steve Hofvendahl as The Judge (having attained his position with no qualifications whatsoever!) reveals that 'the law is the law!" and his rulings are final, adding an ironic twist to how the law might work. La Dee Dah..

Posted by Sheehan at 6:19 PM No comments:

Playwright Brian Friel's reputation as the Chekov of Irish drama seems deservedly so. Open Fist's "Dancing at Lughnasa" (Loo nasa) poetically invites us into his 1936 memory play narrated by Michael (David Shofner) who returns in memory to his childhood: his loving sister/aunties more or less governed by elder sister Kate (Martha Demson) who rides herd on family fantasies. Michael's mother, Chris (Caroline Klidonis) has had her 'love child' with the rascally Gerry (Scott Roberts) who stops by now and then with promises that are seldom kept, but an Irish charm that is irresistible. Maggie (Lane Allison) is the tease whom Michael remembers for her wit. Agnes (Ann Marie Wilding) and beautiful Rose (Sandra Kate Burck) with their sisters all want to attend the Harvest Dance that's on the horizon.  Dancing shoes are constantly being changed and we get a little dancing in the mix.

Father Jack (Christopher Cappiello) has returned from his service as a Catholic priest in Africa and slowly emerges to his old self and with a mighty monologue extols the virtues of the natives with whom he celebrated a religion more true that the one that sent him there.

Set in the mythical Irish town of Ballybeg, Friel poetically envelops us in the love he renders probably from his own childhood.  Born in 1929, Friel wrote the play in 1990, recounting his poetic tale from a considerable distance in time. The depth and distinct personalities of his characters all ring with a gentle kindness that reminds of Martin McDonaugh's "Cripple of Inishmaan."

Set in Donegal: Northern Ireland: Ulster...  the accents that director Barbara Schofield has chosen are more Limerick than Donegal. Stage pictures and the easy flow of the work are well done.

A beautiful set design by James Spencer was solidly constructed by Jan Munroe.

WRONG IS RIGHT AND 'OOPS' INSPIRES!

Ironically. .. my first attempt to load in a photo for this review is hanging up.

Well. on with the show, so to speak.

For those of us in the theatre, we have had moments of forgotten lines, missed cues, a prop gone missing,  or an exit or an entrance that happened, should have happened, happened too soon.. happened too late,, didn't happen at all..  well you get the picture.  And, the darned picture is still loading!
(I tried again and there we are.)

"The Play That Goes Worng"  a masterwork of theatrics, comes to life deliberately over the top while tasking the audience to actually read their programs, should they want to know who's who in the cast.   See above.


Of course it's silly to attempt to out silly amazingly silly stuff.  However, when art inspires us, well... then...   there you go.
The Cornley players of The Cornley University Drama Society are a somewhat ragtag band of players under the mostly unsteady hand of Chris Bean (Evan Alexander Smith) who also plays Inspector Carter in the play within the play.

Sketchilly "written" by Susie H.K. Brideswell, (in fact by Henry's Lewis and Shields and Jonathan Sayer) Society President, Chris Bean, is credited with scenic design and every other credit including voice and dialect coach. Mr. Bean's  amazingly complicated set (actually the incredible design is by Nigel Hook)  becomes another character in the show enhanced by Ric Mountjoy's lighting design and Andrew Johnson's sound.

After Director Chris Bean's curtain speech laying the groundwork for the mayhem to come, lights up as the dead body of Charles Haversham (as Jonathan Harris played by Yaegal T. Welch) almost makes it to the chaise lounge and the beautifully acted bad acting ensues.
From this point on, the uncomfortable silliness escalates with broad physical moments that defy explanation. There are more sight gags than a litter of Golden Retrievers. It's delicious.

In his attempt to steal the show, Ned Noyes as Max Bennett playing both Cecil Haversham, the cad!  and  Arthur the Gardener in Act II may think that he gets away with it, but we know it's you, Max.

Timing, physical gags that make the audience gasp and truly terrible acting make this production out perform Noises Off! at every turn. Noises Off! used to be the standard for really silly theatre but! No longer! TPTWG is now at the top of my list and as the promo that suggests that "Monty Python meets Sherlock Holmes" isn't far from worng! For another silly reference, I mention  the very silly Firesign Theatre just to see if this gets a mention in another on line venue.  See this show!!