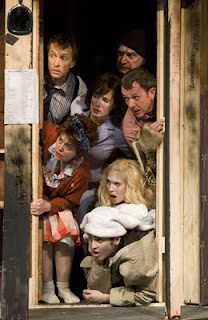 
Less than perfect, Carbon Black, currently at the Autry Heritage Museum produced by Native Voices under the direction of Randy Reinholz (Choctaw) challenges the audience to go beyond obvious production obstacles and get to the heart of its message. Playwright, Terry Gomez (Comanche), has imagined her play set in a small apartment somewhere near Albuquerque. Carbon (Inky to his mom) Black (Michael Drummond) is a bright thirteen year old kid who lives with his agoraphobic single mother, Sylvie (Sheila Tousey: Menominee, Stockbridge Munsee). Evidently, Inky’s mom has been physically attacked in the past and the resultant trauma has her holed up for three years; on public assistance, slipping in and out of reality.

Carbon has missed too many days of school and is called to his counselor’s office, the lovely Lisa Yellowtree (Tonantzin Carmelo: Tongva Kumeyaay), to discuss the issues of his truancy. Enter Bodell Tucker (over the top Stephan Wolfert with a limp), vice principal of Inky’s school, to harass Miss Yellowtree and berate Inky for his wicked ways. Interestingly, Wolfert in his program notes mentions seeing a production of Richard III and being influenced to abandon his military career for a life in the theatre. The irony of this is that his choice for his characterization of Tucker is that he has adopted a club foot and withered hand, apparently an homage to Richard. I mention this only because it was such a distraction to the flow of the production that for director Reinholz to have allowed it seems a questionable decision.

The issues of the underclass, mental illness and its effects on its victims is the message of the play which, in spite of this delivery system’s failures really ought to be examined. Gomez includes light polemics regarding stereotyping Native Americans and prejudice. A charming Native American tune is included by Carmelo in her counsel to Inky and later to Sylvie, that, at once, soothes and swathes the production in it’s heritage.

Unfortunately, the show itself, applauded heartily at every scene break by an enthusiastic opening night audience, is marginally successful as a theatrical production. The auditorium at The Autry is less than theatre friendly, but within the parameters of what they have to work with, Gomez’s message is a cry for attention that our society must eventually heed.

CARBON BLACK
Native Voices at The Autry
Thursday through Sunday
November 7 through November 22, 2009
Tickets and Information 866 468-3399
www.NativeVoicesattheAutry.org
Posted by Sheehan at 2:38 PM No comments: