On the Spectrum by Ken LaZebnik currently running though April 28th at The Fountain tells a story of deep love and big frustration. 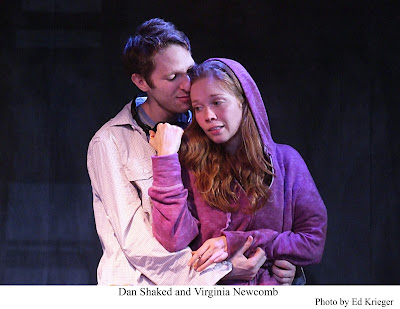 The play's title refers to the spectrum of autism that we may all find ourselves on.  Asperger's Syndrome (a mild form of autism) is at one end and severe debilitating autism is at the other.  Mac (excellent Dan Shaked) is 23. For twenty years with his father out of the picture, his single mother, Elizabeth (Jeanie Hackett in a thoughtful turn), has kept him in therapy and mainstreamed him to be a productive guy.  Mac will always be an Asperger's victim, but has mastered the ability to focus, study and learn. A college graduate, he is applying to Law School.    At rise Mac is drawing on a tablet while listening to music, which he charts like an oscilloscope.  Elizabeth struggles as her job as a photographer/magazine editor begins to fade.  Their diminishing income may mean to make ends meet selling their NYC apartment where Mac has been safe and comfortable most of his life.  Shaked’s adaptation of working to keep from spinning out of control when upset is testament to a studied performance. He is at once funny and sad and making his character work.
Mac is a typical “Millennial” in many ways. He spends a lot of  time on line and listening to music as well as preparing for law school.  With the family financial crisis looming, he applies for a job on line to create computer graphics for Iris (Virginia Newcomb) who has created a web site. Newcomb is a willowy beauty in the Sissy Spacek realm. She is vulnerable and funny and tough. Her website, The Other World, is an online interactive fantasy page.  Iris is severely autistic but types like the wind and we hear and sometimes see her voice/words as she types.  The on line communication between Mac and Iris often appears on screens using John Iocovelli’s creatively functional set. Difficult to watch, Iris has many severe tics and quirks which may be very accurate for someone in her condition.  Perhaps this choice is to drive home the idea that though handicapped physically, this bright and attractive young woman aims to survive.

Playwright Ken LaZebnik’s writing is natural and flows easily along the basic story line.  One issue that puzzled me was the long one act format.  The plot moves quickly once Mac and Iris make their strong connection but we see no insurmountable issues that might make us think that things were not going to work out.  Director Jacqueline Schultz’s input, to her credit, is mostly invisible. How Newcomb keeps up her extreme behavior for the length of the play must be a major challenge. It certainly is for the audience.

Kudos to both video designer Jeff Teeter and tech director Scott Tuomey for amazing projections that fill the stage with phantasmagorical images rivaling any tech in any theater, large or small.  Having seen other shows with marginal projections in the past few days, for the tiny Fountain to bring high end tech to their stage is commendable.

The Fountain celebrates more than twenty years of producing in this unique space on Fountain Avenue this year.  Daring and challenging work has been consistent. This show deserves an audience.