The Gas Station in Adams Hill was saved from the wrecking ball by a team of dedicated neighbors who thought that a parking lot was not a good idea for our little corner where a Richfield Gas Station and then a funky mechanic's shop were standing. In the early 2000s after Mr. Stone had vacated his garage (where I took my Karmann Ghia for repairs for years) it took major efforts by what was then the Adams Hill Homeowners Association to step up to defend the history and tradition of this Streamline Moderne Gas Station.

I had the first art installation in The Gas Station in 2008.

It took the powers that be from February until August to cross their 'ts' and dot their'is' to figure out that filling this space with balloons would be okay. I was determined to have the first installation in The Gas Station.  Little did I know that days before the installation date I'd be asked if I was insured.  My budget tripled with buying an insurance policy for the installation. There was no stipend from the City of Glendale. It was my gift.. Balloons, installation, insurance and all.

To piggy back on the success of the gasstationinstallation,  in 2012, The City had come around to actually providing (apparently) insurance for the space and I curated sixty artists: local and from across the country to participate.  Still at my own expense. Please copy and paste.  http://july4thgasstationproject.blogspot.com/2012/08/heres-to-art-in-gas-station.html

Which brings us to today:  a nice day in July where two energetic performance artists, Bec & Col, have imagined "Installation Lumpen Station" which features a lumpy display of brightly colored lumpy stuff that is echoed in the costumes that the artists used to...  apparently...  dedicate their work to The Gas Station.

I applaud the City of Glendale for coming up with funding for Bec & Col. Their brief presentation consisted of a somewhat obscure circumnavigation of The Gas Station : round and round, first by the character in a costume that was slightly reminiscent of the hot Martian in Tim Burton's "Mars Attacks!" 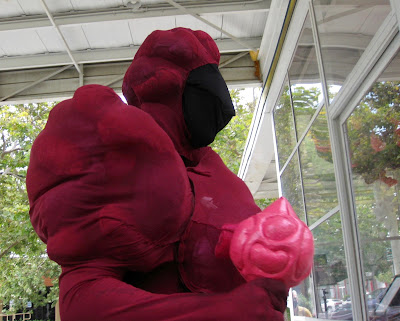 He/she/non-binary? strode, sped, limped, careened around the four sides of The Gas Station for a while and then the silver gray Other who looked very remotely like "Mother" in Ridley Scott's "Alien" followed along. 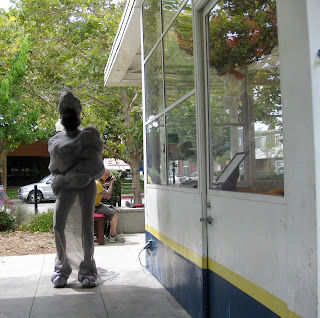 Both critters were definitely out of this world. The accompanying sound consisted of escalating shrieks and screams with some sort of musical accompaniment. There was a relationship between the Silver character and the pinkish one, but exactly what it was is unclear .. it was, evidently, revealed  in the front of the Gas Station. 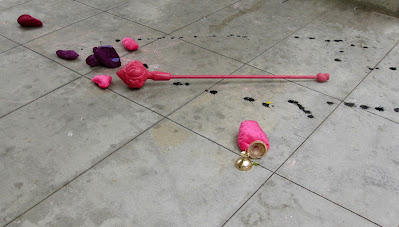 Both performers circled the Gas Station with something happening out of sight from where I was sitting. They had chosen the front of the space for their finale. There had been an unsuccessful chalking of the route around the Gas Station by the character reminding me "Mars Attacks!" There was then some major activity out of my sight. By the time I got up to see what was happening, the forty or so folks in the audience were applauding and the artists had retired to their portable dressing room.  The dressing room is a pop up one person pod that is pretty cool. 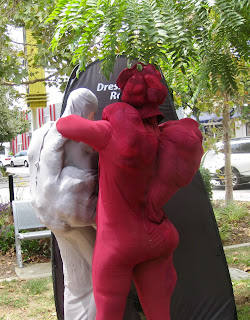 For the rather conservative City of Glendale to invite these 21st Century artists and their performance piece is impressive. The installation is provocative. It consists of lumpy organic stuff that hangs from the interior of The Gas Station as well as what looked like.. sort of intestines (not in a bad way)  stuffed into the bottom of The Gas Station.

What I loved about the performance as well as the installation (that will be  up until August 20, 2021) , is that that the City paid Bec & Col to do their piece.  That is very impressive.  I've tried to find out what the stipend is and so far have not been successful.

There were three curtain speeches by the president of the Adams Hill Neighborhood Association and a  politically appointed representative of the Library / Arts and Culture Commission. I'm not sure who   the third woman 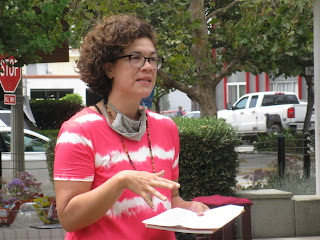 was. She may have had something to do with hiring these artists. The poor Mars Attacks ! performer had to stand by with his/her/their staff/wand/thing and patiently wait for the speeches to be over, while the audience stood in the sun and time went by. Slowly.

Had these artists been able to convince the City that an evening performance  with appropriate lighting might have been a good idea, the audience would have come in the cool of the day and maybe with a minimum of hype from the curtain speakers; could have maneuvered themselves and their audience around The Gas Station in such a way as to present the entire performance to the whole audience. There was nothing to prevent the audience from moving but propriety seems to make us need to sit still while the show is going on.

It doesn't matter to me that the relative obscurity of substance in this piece is up for grabs.  It doesn't matter 'what it means' or what the artists were wanting to convey. What does  matter is that they were given a venue and paid, as art and artists should be compensated, for hours of work and developing ideas to express what is mostly an abstract/organic/far out experience.

If there's a polemic here, I missed it. Had Ken Roht been involved, the grandeur of the costumes and the installation and the performance may have taken on an even more organic and provocative glow.

Speaking of glowing.. had this performance been presented after dark or even at dusk, with lights from the interior of The Gas Station, the effect would have been amplified just by the drama of the moment.

That I've been a neighbor in Adams Hill for many years and supportive of the efforts on behalf of The Gas Station and, today, was not acknowledged by one of my neighbors, speaks to how being sometimes critical of the administration of The Gas Station pays off in shunning.  That is on me. Criticism is what gives any art form an objective point of view. As in this web site, I critique theatre.

Fact is that I appreciate the efforts of Bec & Col. It is on me that working in a committee is contrary to my basic aesthetic.  To call my neighbors snobs or members of a clique would be unkind.  They seemed to be quite pleased to see one another.

There were refreshments probably courtesy of the Adams Hill Neighborhood Association.

Posted by Sheehan at 4:57 PM No comments: