SCOTT AND HEM at The Falcon in Toluca Lake

Playwright Mark St. Germain’s take on what a meeting between old pals Ernest Hemingway and F. Scott Fitzgerald might have been like in the hey day of Hollywood circa 1937 ran into a slight glitch opening night.  Adam J. Harrington, the original actor to play Scott, was replaced by understudy Thomas Owen.  St. Germain’s play itself on Francios-Pierre Couture’s beautiful adobe set struggles with a sense of true purpose. The actors, though reciting well and embodying some essence of these two famous writers, only hit their marks if you buy their story.
Fitzgerald is squirrled away in an apartment at the infamous Garden of Allah and is all watched over by the gorgeous Eve Montaigne (gorgeous Jackie Seiden) who is on hand to be his assistant as well as his guardian to prevent him from lapsing into his cups, preventing him from finishing a screenplay.  We learn that if Scott doesn’t come up with the goods, it’s curtains for him as well as for Ms Montaigne.  It’s an odd situation for the Fourth of July at a notorious hot spot where orgies and other shenanigans going on were legend.

Hemingway enters. Rather, in bursts handsome Ty Mayberry, mid thirties; sui generis.  Mayberry captures the swagger and even the look, but after consuming two full fifths of alcohol by the end of the full length one act, he is still ramrod straight and unchanged from the moment he enters and attempts to seduce Ms Montaigne.  All the while Hem’s attempt to lure Scott back to drink has an ulterior motive.  The killer complications of these two most famous contributors to the American literary scene swing to Scott’s need to institutionalize Zelda; resist the temptation to abandon his full nine days of sobriety and finish this script.. Or, else!

Energy rises on stage when Seiden sweeps in to monitor the goings on and fend off Hemingway’s advances.  Otherwise, it’s pretty much a text book rendering of a “what if” that is a play that leaves more questions wanting than answered.

Posted by Sheehan at 4:59 PM No comments:

What I love about the Independent Shakespeare Company’s work is that it’s all about the Work..  No frills to speak of, trained professional actors, simply ‘a plank and a passion.’  They are lean and lithe, especially our gorgeous little Ingénue, amazing Erika Soto, who flies in to an “open rehearsal” for RICHARD III starring Himself: The Actor (David Melville, who also collaborated with the company on the script).  He is the man with all the credits and all the attitude and all the ‘stuff’ that sometimes makes us cringe if we are dragged kicking and screaming to see something by The Bard.  Melville’s tongue in cheek approach to Richard is delightfully way over the top and his impatience when we learn that the director of the piece has fled and that the actress to play Mrs. III, Anne Neville, has split the scene as well.

The Ingénue is handed the script and attempts to read the queen’s lines.  As all actors should do in seeking clarity in their character’s parts, she is flummoxed by the speech, stops the reading and simply asks for clarification regarding the lineage of Richard…   and away we go.

Stage Manager Sam Breen’s terrible Accent Francais thankfully disappears as The Actor and The Ingénue and The Stage Manager begin to chart the Strange Eventful History of the kings of England.  Familiar scenes from other plays of Shakespeare emerge with these three:  these happy three, this band of two brothers and a sister as they embark on a wild and furious ride that, though imperfect, is perfectly presented with The Actor using an entire wall to chart the lineage of the Kings of England.  Melville and the ISC are not the Reduced Shkspr Co.  They are specific in this presentation that brings to the audience a peek into what Theatre is all about.  We see behind the scenes a bit and as the actors morph through generation after generation of the Royal Monarchy, we keep track of who’s on First by the writing on the wall.

Direction is a bit hazy.  Joseph Culliton is credited with ‘Direction’ instead of ‘directed by’ and this may be because the entire company is credited with the development of the piece with Melville.  Some scenes placed far downstage play wonderfully well for the  first row, but then the folks behind must shift and crane our necks to see the action.    However, the evening goes a pace and the actors coming in and out of their ever changing characters proffer a lesson of which few of us may be aware.  This presentation is wonderfully graphic with these three strong talents romping through the ages.  A rack of costumes stage right by Houri Mahserejian and simple set by Caitlin Lainoff work just fine.

Uncomfortable seats in a wonderfully rag tag rehearsal space elevate this production to the heights.  Go and see it!
Ticket prices are as follows:
Generous Admission: $35
General Admission:  $20
Ten tickets are set aside for each performance at no charge.
Call ISC for information.

STRANGE EVENTFUL HISTORY
By David Melville and the ISC company with
William Shakespeare and Christopher Marlowe
Independent Shakespeare Company
3491 Casitas Avenue  #168
(Enter on the west side by the parking lot)
Los Angeles, CA 90039
Through November 22, 2015
Tickets and Information:
818 710 6306
www.iscla.org

Posted by Sheehan at 1:58 PM No comments:

UNCLE VANYA AT ANTAEUS: The Vixens!

Czarist Russia in the last part of the 19th Century predates the Russian Revolution of 1917 and the rise of Bolsheviks and the establishment of the USSR.  Not unlike the issues that challenge us in the 21st Century, the elite are in power and times are changing. Vanya (excellent Ayre Gross), uncle to  Sonya (Shannon Lee Clair), the daughter of Serebrakov (steadfast Harry Groener) and Vera (now deceased) has managed the estate and farm that Serebrakov  (now remarried to the fetching Yelena (yummy Rebecca Mozo) and Vera have established.  The tangled web of who loves whom and (like the Cherry Orchard?) what shall become of the estate emerges.   Though I am not a Chekov scholar by any stretch of the imagination, my recollection of every play of his I’ve ever seen or directed or acted in, there’s angst and trouble brewing.  The future, if there is one, is bleak.  The message, however, is that we must endure.

By chance I paged by a TV sitcom, “Ellen” while stalling the writing this review.  There, twenty years ago is love sick Ayre Gross as series regular Adam Green, pining away for a woman that Ellen has fixed him up with, only for him to be rejected. 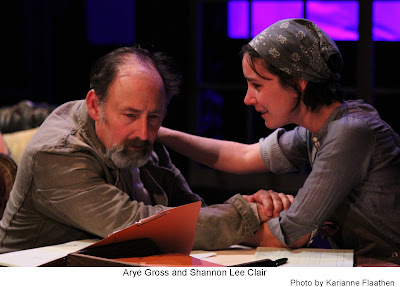 Fast forward to 2015 and then backwards again more than a century to Chekov’s Russia.  There’s Ayre again… pining away for his youth and what might have been. This new translation of Uncle Vanya is streamlined compared to other translations I’ve heard.  There is a modern click track that keeps the action moving (thanks to director Robin Larsen’s smooth hand) and the language, though still sounding like Chekov, is less stilted and more accessible.  The year is 1898, at the sixty four room mansion on the estate where Vanya,  at ‘the age of 47 years’   pines away for the much younger and lovely Yelena, wife of The Professor. As Serebryakov, Groener carries the feeling of the Russian aristocracy on both shoulders and realizes that he is much too old for his trophy wife who turns the heads of every other male on the stage.  Vanya laments in soliloquy not sweeping Yelena off her feet years ago when she was fourteen and was only twentyseven.

As in many of  Chekov’s plays, change is inevitable.  Folks are coming and going, hearts are breaking; love is unrequited. Sonya loves, Astrov, the Doctor (Andrew Borba). Astrov yearns for Yelena and Marina (Dawn Didawick) wishes that he would notice her.  Age is taking its toll and change is unavoidable.  Sadness and angst prevail.   Annie Baker’s adaptation of a new translation of the play from the original Russian by Margarita Shalina simply works. Works beautifully.  This gives director Larsen and her Antaeus actors (there are two separate but equal casts) room to move.  Flowing text and crusty angst create an odd feeling of cognitive dissonance with the essence of 19th Century Russia and a correlation to today’s social situation, including Astrov’s intense interest in saving the trees.

Kind and philosophical Mimi Cozzens as Maria adds texture as this cast moves as an ensemble, with only occasional nibbles at the scenery.  With such angst abounding, it’s permitted.

The tiny Antaeus space on Lankershim has been slightly expanded to accommodate interiors and exteriors of the estate while Waffles (Excellent Clay Wilcox on the mandola) sings interstitials with Yefim (Paul Baird) on accordion.  All together it’s what I believe Mr. Chekov would applaud heartily.   I certainly do and encourage you to get to Antaeus in this, their last season on Lankershim.  Broadway here they come!! (In Glendale!! in the later part of 2016)

Posted by Sheehan at 3:27 PM No comments: