It's A Dilemma at ANW

You Can’t Take It With You 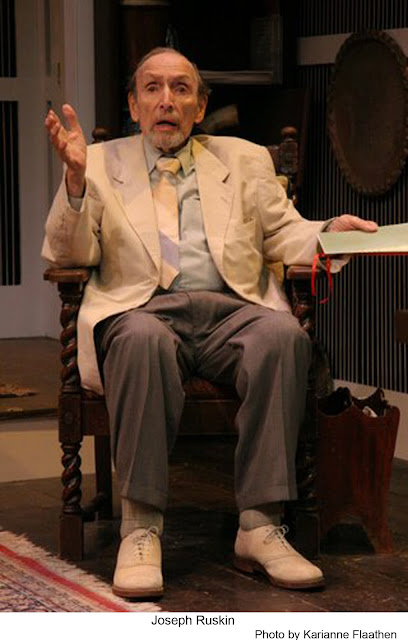 Anteaus Theatre Company is brimming with a family of dedicated theatre people.  Certainly, many of them have done well in feature films and television, which pays the rent, but their loyalty to the Theatre is a calling that few can truly understand.  Helen Hayes was reported to have said something to the effect that ‘he gave a great performance’ pointing up that when an actor puts on a character and hits the stage, it’s a gift to the audience.  Making money as an actor is an iffy business and doing the sort of theatre that we are gifted with by Anteaus isn’t making anybody rich.  However, the rich gifts that are offered in Kaufman and Hart’s silly play currently offered up at Deaf West Theatre in NoHo are a bargain that should be savored: twice.  A tradition that Anteaus continues is a good one. Two casts, The Kirbys reviewed here and on alternate dates The Sycamores present a classic American comedy.  Imaginative director Gigi Bermingham has her hands full with over thirty actors to keep track of.  Fortunately, these professionals step up to the plate, making Bermingham’s job that of inspiring and fine tuning an excellent cast.

The Kirbys Cast is made up of dedicated actors who jete, amble, ramble, scurry, scramble, stroll, limp and hustle on Tom Buderwitz’s gorgeous 1930s set.  From time to time we hear and FEEL (thanks to Jeff Gardner’s vibrating sound design) an explosion from the basement where the family patriarch, Paul Sycamore (Marcelo Tubert), maintains his illegal fireworks factory with his quirky assistant, Mr. Depinna (Tony Abetemarco).  Like The Munsters, we have one ‘normal’ ingénue who works on Wall Street, perfectly cast Lizzie Zerebko as Alice Sycamore.  Lithe and lovely, she’s head over heels about Tony Kirby, Jr. (Jeremy Glazer) whom she met working in Tony’s father’s firm. This is young love at its most romantic.

As Mom Penny (Perfectly charming Julia Fletcher) knocks out plays on a typewriter (that was delivered to the Sycamore home by mistake) and daughter Essie (very flexible Linda Park) practices her interpretive dance around the living room/dining room/family room table, her husband, Ed Carmichael (Michael Hyland) ‘creates’ Moonlight Sonata on his xylophone when not printing out quotes from Trotsky and delivering wife, Essie’s candy which she creates in the Sycamore kitchen.

It’s a three ring circus with Grandpa Vanderhof (the amazing and fabulous and dedicated Joseph Ruskin) administering his avuncular wisdom: the calm center of the maelstrom.  I have to insert a disclaimer here.  Joe Ruskin is a pal.   He has been one of those actors whom we have seen for most of our lives in hundreds of edgy roles as a dedicated working actor. His success stems from his being present and accounted for.  Recipient of the Ralph Morgan Award from the Screen Actors Guild and deeply engaged in the working conditions of actors for many years, not only is his well seasoned take on Grandpa Vanderhof endearing, it reflects his dedication to the craft of acting.  Experiencing Joe bring this character to life with such grace is a pleasure that I’ll always remember.  His real life daughter, Alicia, was my agent for many years and her dedication to representing actors is a direct reflection of her dad’s professional ethic.

We now return to our regularly scheduled review.

It’s a simple story.  A ‘normal’ daughter has emerged in the middle of a wild and crazy family. Every single character is crisp and funny. Penny wants one of her play scripts to be interpreted by a professional and hauls an actress, Gay Wellington (adorable Janellen Steininger) home to do a reading. Gay is a fabulous drunk and passed out on the couch when Tony brings his hoity toity parents, Mr. and Mrs. Kirby (straight from Central Casting in the best sense: Josh Clark and Shannon Holt) to meet Alice’s parents.  Russian dance master, Boris Kolekov (over the top and having way too much fun to the delight of everyone, Jeff Doba) who blows in from the Steppes regularly to instruct Essie in ‘la danse’ creates havoc. Ms Holt returns with a flourish as Olga, a deposed Russian Royal, currently waiting tables in Times Square.

Tech credits are all super with nods to A. Jeffrey Schoenberg’s costumes and Heather Ho’s props.  Director Bermingham’s subtle hand in broad strokes has created a hit in every sense of the word. It’s a straightforward comedy that reminds us all that having a little fun is what life should really be about.  To quote a phrase, “Don’t Postpone Joy.”  Please see this show more than once.  Invest in great theatre. You Can’t Take It With You!