EXTENDED! Amazing Odets’ AWAKE AND SING at the Odyssey

The acoustics at The Echo in the Atwater Village Theatre are strange.  This is appropriate as Miki Johnson’s play, American Falls, is at once linear and also all over the map.  As the audience filed in, music playing was difficult to parse out.  The whole scene (a tableau has the actors all on stage, as they are for the entire show) is at once very ‘homey’ and foreboding and forbidding.   I was immediately transported in memory to David Lynch’s mysterious television series, Twin Peaks.  Beneath the rumble, I could hear the falls and Angelo Badalamenti’s haunting theme in my head.  There was another rumble, maybe the air conditioner that underscored the lines of the play but seemed oddly appropriate.  Chris Fields’ handling of this very odd piece leaves room for the individuals whom we meet their own time and space.  It’s a sad and disturbing story of misspent lives, angry diatribes and elements that leave an audience wondering.  Barbara Tarbuck as Samantha sits quietly in her rope swing and in her turn relates that she’s pushed eleven human beings from her body. A life a drift on oceans of beer and clouds of tobacco as she tramped  her way through high school focuses on her son, Samuel (Karl Herlinger), her surviving triplet.  We are tossed back and forth from Limbo to American Falls through time and no time piecing together Johnson’s jigsaw puzzle pieces of unhappiness. 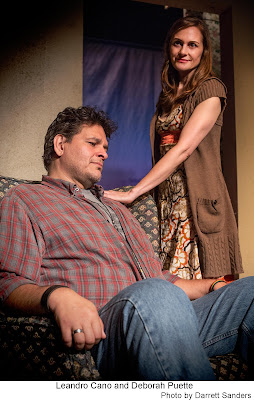 Billy Mound of Clouds (excellent Leandro Cano)  works at Payless shoe store and relies heavily on his shoes and his feet inside his shoes to get the sense of the goings on in American Falls, Idaho.  It’s Magic. Not “bullshit magic,” but real MAGIC… He is a Native American but he is not an alcoholic.  He’s done his time with alcohol and meth, but now.. he watches TV and loves his girlfriend, Gloria. And, he listens to his shoes.  As narrator, he engages us deeply and sincerely.  In the Q and A following the show, an audience member pointed out that everyone was “on the same train.”  I have to slightly disagree. The scene featuring Eric (Eric Hunnicutt) and his pals, Maddie (Beth Triffon) and Matt (Garrett Hanson) sitting at a kitchen table tossing back Jaegermeister shots and beer telling tales of dreams and such only slightly paid off in the end.  The play breaks the fourth wall and retains in an interesting way. The significance of the young folks off by themselves was a mystery.

Lisa (Deborah Puette) is lithe and airy and dead.  She is nowhere, but also is with us to explain how she came to die and why.  Samuel, now a widower and “not dad” to Isaac (Tomek Adler) has seen his wife go from fat and ugly to slender and pretty and then just gone from him because of Eric who swept her off her feet when they met in Algebra II in a community college in Pocatello.

Dramatic tension is palpable as Samuel’s dance of anger and hatred bubbles within him. Isaac is the recipient of this tirade as it escalates to a boiling point. 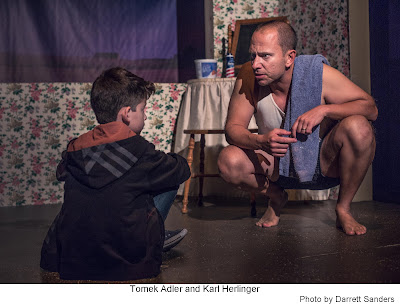 Johnson says that she didn’t consider Thornton Wilder’s American Classic, Our Town when writing this play.  Indeed the plots are very different, with her take on small town Idaho and infidelity and dead people walking carries with it more questions than answers.  Still a comparison is in order, no matter how dark.   Fields guides his actors through a virtual mine field.  The dance they do to keep their lives afloat engages and envelops us.

With actors sharing roles from performance to performance, it was noted that the energies and ‘textures’ of the acting gives each diverse cast more to work with.  Everyone is on the stage for the full 72 minutes.  It nicely ebbs and flows. Though the dreams discussed in one portion of the play seem to be somewhat disconnected from the other scenes, there must be a reason.  It just escaped me.

To leave a performance filled to the brim with the play, though a bit uncomfortable, is a rare and welcome occurrence. The Echo Theatre takes chances, which I applaud. AMERICAN FALLS serves up food for thought and strong emotions. When you go to see this one, your comments and insights are solicited and welcome.