"Take us the foxes, the little foxes, that spoil the vines: for our vines have tender grapes."

Lillian Hellman's 1939 play, THE LITTLE FOXES, may take it's title from the Song of Solomon.  The playwright's politics and strong opinions certainly inform the subtext of this play currently gracing the beautiful Victorian set by John Iacovelli at Antaeus Theatre Company in Glendale.

Hellman's being called before the House Un-American Activities Committee and her partnership with Dashiell Hammett, all speak to the underlying 'stuff' that makes a powerful play like this one possibly suspect to the powers that be.

Director Cameron Watson's cast presents well Hellman's undercurrent of greed embodied in Regina (rail thin Debroah Puette) the queen? whose lust for wealth  and position in life is unquenchable. Terri A. Lewis's gorgeous costumes and an air of presentation unfolds in three acts with the lines of conflict clearly drawn.  It's the early 1900s.  The southern 'aristocracy' and the abuse of power unfolds with the Hubbards: Benjamin and Oscar (respectively Mike McShane and Rob Nagle) brothers to Regina who has 'married well' to Horace Giddens (John DeMita) whose wealth is important to a huge business deal in the works. Watson has honed Hellman's characters to a razor's edge that is predictable from the first scene.
The exuberance of Birdie (Joycelyn Towne), Ben's wife and his bullying her into submission, along with the treatment of the negro maid, Addie and handyman, Cal (Judy Louise Johnson and William L. Warren)  sets the stage for the manipulation of wealth at the expense of Regina's ailing husband, Horace.

The Song of Solomon reference plays out as the greedy principals scheme to 'make millons' with the slyest fox of all, Regina, finding a way to increase her own financial and social position.

As Alexandra, Horace and Regina's young daughter, Kristin Couture, may be paired with the bumbling, Leo  (Calvin Picou), who through misdeeds has procured $88,000.00 in negotiable bonds to move forward the deal his father and uncle hope to close. ($88K would be the equivalent of over $2.6 Million in today's money!)  With this kind of cash in play the stakes are extraordinary, not only in wealth, but in the moral turpitude engaged to take advantage of Horace's wealth.

The bully tone of the brothers and the succinct observations by the help are Hellman's commentary on what unfettered ambition and greed can do, not only to a family, but in essence to a nation or the world.   This is summed up by Addie's observation,
“There are people who eat the earth and eat all the people on it like in the Bible with the locusts. Then, there are the people who stand around and watch them eat it.”

This moment defines the play in a nutshell.  The Hubbards are a greedy lot with Regina the most loathsome of all. Flirting shamelessly with entrepreneur William Marshall (Timothy Adam Venable), she only wants more...  and like the 'little foxes' in the Bible, is party to stooping to what is tantamount to murder to get more than her fair share out of life.
Antaeus dedication to high quality productions of classic as well as classical theatre is at its pinnacle in this presentation.  Direction, acting and tech meld to present a play worthy of high praise.

Posted by Sheehan at 4:01 PM No comments:

MURDER! At The La Mirada..

AGATHA CHRISTIE'S MURDER ON THE ORIENT EXPRESS adapted for the stage by Ken Ludwig.

Murder most foul has ruled the headlines, whispered about through the ages and has been the absolute most dramatized solution to the problems of those bent on revenge or filled with ambition for time immemorial.

The novels of Agatha Christie continue to amuse in some perverse way the imaginations of millions of readers (and movie and theatre goers) around the world.  Christie's Belgian detective, Hercule Poirot, has solved this mystery in the movies since the book's first arrival on the scene in 1934.  Most recently, Kenneth Branagh's film version featured himself as Poirot only last year followed earlier versions with Albert Finney and Alfred Molina as the detective.  The lush experience of these films on the 1930s Orient Express is challenged by bringing the project to the stage. Director Sheldon Epps's keen eye and deft direction, blots out the image of the cinema,  retelling on the LaMirada stage is lush in its own special way.

McCoy / Rigby don't spare the horses with this lavish production in its West Coast Premiere. Stephen Gifford's gilt edged scenic design delights as the events that are familiar to readers of Agatha Christie over more than eighty years come to life on a full sized railroad train!

As Poirot, Tony Amendola one by one puzzles out whodunnit with the cast of suspects, each with a motive and each with an alibi! For those who have not read nor seen this story, stay in the dark until the final curtain. This is pure theatrical excellence at its elaborate best.
AGATHA CHRISTIE’S
MURDER ON THE ORIENT EXPRESS
adapted by Ken Ludwig

Directed by Shedon Epps
Through Sunday, November 11, 2018
Wednesdays; Thursdays at 7:30pm;
Fridays at 8:00pm;
Saturdays at 2:00pm; 8:00pm
Sundays at 2:00pm.
Tickets and information:
www.lamiradatheatre.comor
(562) 944-9801 or (714) 994-6310
Student, Senior and group discounts are available.
$15 Student Tickets available for the first 15 performances of the production.
LA MIRADA THEATRE FOR THE PERFORMING ARTS is located at 14900 La Mirada Boulevard in La Mirada, near the intersection of Rosecrans Avenue where the 91 and 5 freeways meet. Parking is free.
Posted by Sheehan at 2:49 PM No comments: 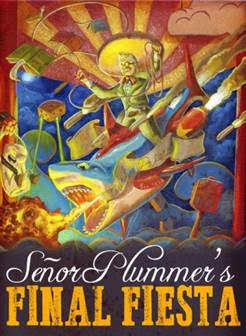 Posted by Sheehan at 1:47 PM No comments:

REAL WOMEN AT THE GARRY MARSHALL

It's 1987 in East L.A. Teen angst in transition puts Ana (Juliana Stephanie Ojeda)
in the dilemma of clinging to traditional Mexican family values while the siren song of the future calls her to her own life which she documents in her private journal hidden in the tiny bathroom of her sister's sewing 'factory'.
Similar to Fionnuala Kenny's "Elvis's Toenail" that turns on the sewing trade in Dublin, we find cultural transition center stage as changes in the role of women in society and in the family emerge.
Ana's older sister Estela (Sherry Manujuano) has created a small sewing shop where her mother, Carmen (Blanca Araceli) and workers, Pancha (Jackie Garcia) and Rosali (Claudia Duran) secret themselves behind locked doors to finish a big, big order of dresses that will wind up on the backs of 'skinny white women' for four hundred dollars a piece.  Originally presented as a stage play in 1990 (and later as a film), Lopez's naive polemic promotes somewhat stereotypical archetypes with Ana, the aspiring writer, who sneaks into the tiny bathroom to narrate the story that will become her play as it becomes her life. A recent high school grad with high aspirations (that we learn in a final curtain speech do come true!) she emulates Sally Field in Norma Rae by standing on a chair to coach the others in how to say NO! Well before what has become the somewhat hysterical #MeToo movement, we see Estela charmed by an unseen Latin lover who slides poetic billets doux under the door: "How do I love thee, let me count the ways..."

As an homage to their curves.. each of the women in the second act strips to give us the idea that weight is just number, except for Rosali who tells the girls that she's on a diet "from China", which must include dehydration as she faints from the heat in the tiny sweat shop.

All's well as the overlock machine is figured out and the hundred dress quota is fulfilled with Estela then dismissing with extreme prejudice the demanding client for whom the fancy dresses have been made. Director Mary Jo Duprey creates stage pictures in an odd split focus from time to time, but over all the play... such as it is...works fine. A feel good story from the barrio, Tanya Orellana's realistic set announces in big letters No Chisme!!! reminding us that gossip is verbotten!