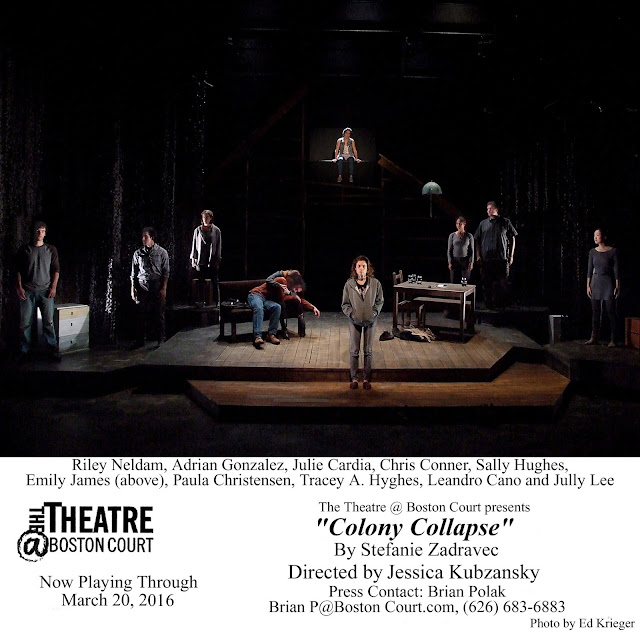 Colony Collapse: the term referring to the disappearance of honey bees around the globe is referenced in detail in the text by the Girl (excellent Emily James) whose polemic statistics regarding the reduced bee population are staggering.  At rise we meet The Chorus: Jully Lee, Adrian Gonzales, Julie Cardia, Tracey A. Leigh and Leandro Cano: parents who recount in pantomime and dialogue .. interspersed in a chorus of ‘Breathe…’ the details of how each of their children has gone missing.  The parallel reflects the missing children and melds with the missing bees.

Enter Jason (Riley Neldam) in the middle of the night to his father’s, (Chris Conner) Mark’s, farmhouse.  Jason is confronted in the dark by Julia (Sally Hughes), Mark’s younger wife. Mark has divorced from his druggie wife, Jason’s mother, Nicky (over the top Paula Christiansen) and is attempting to make a new start as a farmer after his own issues with alcohol and drugs.  Jason then becomes a catalyst of sorts who works to compare the missing Girl and other children to the collapsing colonies of bees.  Susan Gratch’s dramatic set stylistically creates many different playing spaces with the Chorus  serving as occidental koken who move set pieces and props to facilitate the action.

Excellent use of the space by director Jessica Kubzansky brings the show dramatically to life.  Modern theatre architecture includes tight wire grids in the flys which are used at one point to facilitate the Girl literally lying face down high above,  talking to the audience about the bee situation.

Applause to the Boston Court for hosting this world premiere.  Exposing the audience to new and experimental theatre is commendable. Overly long and somewhat confusing, the play needs help. Perhaps, with
judicious cutting the piece might become a very interesting play.