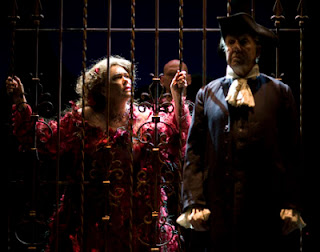 Deborah Strang and Nick Ullett Photo Credit Craig Schwartz
Pasadena’s A Noise Within’s dedication to bringing the ‘classics’ to life is well played this season.  This third entry for the season is a winner.  Pierre Corneille’s The Illusion, adapted from the French by Tony Award Winner Tony Kushner, moves smoothly exploring the difference between Reality and Illusion.  In Margery Williams’s  story The Velveteen Rabbit asks “What’s Real” to learn that Love may be the answer.  Corneille is more cynical, saying that “Love is an Illusion: a demonic black disease.” The story would argue the contrary, however, as the splendid Nick Ullett (“Uh Lut” s’il vous plait) as Pridamant goes to a lot of trouble to try to find and reconcile with his son, Calisto/Clindor/Theogenes (broad strokes by Graham Hamilton).  We learn that all of the conjurings by the sorceress Alcandre (brilliant Deborah Strang, Deborah Strang!  Deborah Strang!!  Deborah Strang loves to pose and her theatrics are delightful here) that make up this sweeping chronicle may be themselves simply Illusions.  The scenes conjured by Alcandre are reminiscent of The Fantastiks where the boy, Matt, is bounced through the rigors of the world every which way through El Gallo’s vision “I Can See It.”

You can’t tell Corneille’s characters without a program and even then, keeping track of who’s who playing whom and when and where may be a bit of a challenge.  Effervescently rising to the top is a dark haired beauty, the exquisite Abby Craden as Elisa/Lyse/Clarina, somewhere along the line more or less swapping social stations with the equally impressive Devon Sorvari as Melibea/Isabelle/Hippolyta.  Action is magical and well paced.  The audience’s keeping up is almost as much fun as the actors are having on the stage.

Alan Blumenfeld in a complete 180 from his recent turn in Baby Doll, is funny and charming as Matamore.  Multiple turns by Freddy Douglas and Jeff Doba are impressive. Ensemble members beautifully facilitating scene changes are the able Katherine Lee, Alex Parker and Michael Sanchez.

Casey Stangl’s direction kept things moving, but stage pictures were sometimes off by just a hair.

When all is said… and done…  to mount three shows with major scene and lighting shifts necessary night after night is a gift.  A little culture is good for us.  That ANW culls these somewhat obscure plays from theatre history and makes them work is to their credit.

The Illusion by Pierre Corneille adapted by Tony Cushner

Posted by Sheehan at 8:20 PM No comments:

As a former High School Drama teacher, I highly recommend seeing these kids in action. The camaraderie that holds these young actors together is like nothing you've ever seen. I count the participation of my students in the High School Drama Festival at Cal State Long Beach produced by Professor Ken Rugg as life changing.

It's happening early in the day, but it will be worth the effort to make it to Pasadena to see Theatre at its best.

This from Patty Onagan and Joel Hile, Publicists for The Playhouse:

The Second Annual High School Theatre Festival is on Saturday, May 12, 2012, at The Pasadena Playhouse (39 S. El Molino Avenue).

All tickets are $5.00 general admission, and are available for purchase online at www.PasadenaPlayhouse.org, by phone at 626-356-7529 or by visiting The Pasadena Playhouse Box Office.

For more information, contact The Pasadena Playhouse Development Office at HSTF@pasadenaplayhouse.org or 626-921-1156. Information on all current Outreach and Development events is available by visiting www.PasadenaPlayhouse.org.
Posted by Sheehan at 10:48 AM No comments:

Tennessee in the Summer: Hot Stuff 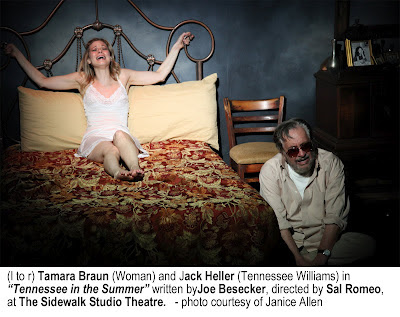 Joe Besecker’s dramatic romance with the life of playwright Tennessee Williams directed with a fluid hand by Sal Romeo currently comes to life at the Sidewalk Studio Theatre in Toluca Lake. I have not vetted how accurate Besecker’s research has been, but the creative effect of showing Williams as the boozy egomaniac he might have been and simultaneously as a sexually charged barefoot nymphet clad only in a slip lends electricity and insight to Tom’s journey.

Lacey Anziec’s simple set with empty picture frames, shabby furniture and mottled gray walls is strewn with discarded pages; well illuminated by Paige Selene Luke’s simple lighting design. The pages, ripped from his old Remington, are rejected attempts by Williams (powerful Jack Heller) and his alter ego, The Woman, (lithe and sexual Tamara Braun) to continue to work as he struggles with drugs and alcohol; success and failure. The pressure of Williams coming from a family of lunatics at once gives insight into possible sources for Amanda, Blanche and Maggie the Cat: each of whom appear here in other forms. Rose (Williams’ psychotic sister) is portrayed gently by Louise Davis who also limns the Nurse and Tennessee’s mother, the equally batty Edwina.

Set initially in 1972, Williams struggles with issues of bad reviews of his Small Craft Warnings and is taunted by his alter ego, The Woman, posing seductively in a window facing out from a New York hotel room. She lures a boy to come up to play. The voice of Williams seems to be channeled by Besecker using phrases like “my writing is the universe” and “I want to get my goodness back” which may have been direct Williams’ quotes. Romeo’s pacing and stage pictures, especially the image of the crucifixion of The Woman confined in a mental hospital for his over indulgences ties the work together.

Robert Standley finds three strong attitudes with his Youngman, Frankie (Merlo) and Dakin, Tom’s brother. Frankie and Tennessee meet at a party where the young Sicilian hunk offers himself to the writer on a silver platter. They stay together for fourteen tumultuous years with Frankie at once a trifle and also the Love of Tennessee’s life, though shared with a myriad casual lovers who never seemed to quench the writer’s insatiable sexual appetites.

Not for the prudish, the work in this production is professional and deserves an audience. The closeness of the seating to the stage allows for subtle and moving moments as well as literally feeling the heat of the characters as they smolder and occasionally burst into flame.

Whether or not to take the story literally is optional. For any student of Classic American Theatre, even the casual mention of “Streetcar” or “Menagerie” are enough to become immediately enveloped in the larger than life characters who, at once, are familiar and completely honest and truthful to their stories. It’s about the drama of the Drama, after all, and Tennessee Williams will remain, himself, a Classic American Dramatist.

The turmoil suggested in Tennessee in the Summer is testament to where the Drama must have come from. The play presents an equally fervent illustration of the passions, not always uplifting, that created its tragic hero.

TENNESSEE IN THE SUMMER

Fridays and Saturdays at 8PM

Posted by Sheehan at 4:40 PM No comments: 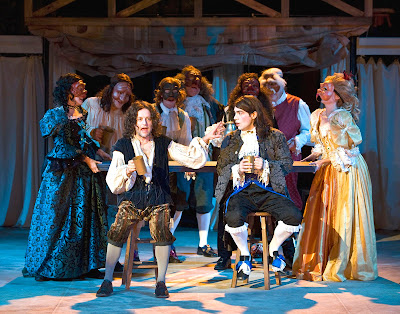 Posted by Sheehan at 2:55 PM No comments: