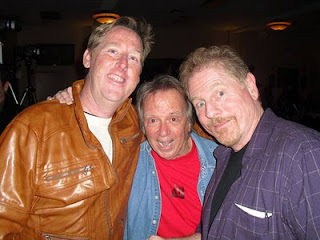 As a side note, the Moose are looking for a few good members: men and WOMEN! who may become a driving force to lift the spirits of the community by making this fantastically funky facility a venue for Variety Artists, musical events, comedy and a magnet for not only vaudevillians, but people who want to serve the community. To that end, on Friday, December 3, 2010, from 7:30 -11:00PM Moose Lodge #641 will hold an Open House at the Lodge: 357 Arden Avenue (2 blocks north of the 134 Freeway), located between Pacific and Central in Glendale, CA 91203. It's a wonderfully funky venue that deserves to be put to full use. New membership is the answer.

This review from Judy Kory in a letter to her sister, Stephanie, in Hawaii:

"I just got back from one of the most incredible evenings of my life, a benefit show and raffle for William (aka "Billly") Barrett. All these friends of William showed up to perform, sit in the audience roaring with laughter, eat healthy, homemade snacks, give generously for donated crafts and prizes such as: crocheted fools' cap 'n bells (mine) romantic, sexy clothing by Barbara Butcher; certificate for an hour with a psychologist; beauty products; yoga lessons; paintings; cds; antique memorabilia, sports event tickets; toys and much more.

The show!! OMG...all these faire folk and variety artists!
I'm sleepy so I'll describe just a few: the Flying Morgans' amazingly twisted contortionist/acrobatic act; Mitchel Young Evans' newly classic clown/mime; the 3 rapidly juggling, drumming, Mums; a sensational Mat Plendl and his amazing hula hoops; Christina, the sexy diva, singing and flirting with a nervous guy from the audience, who turned out to "eat" razor blades and gracefully dance; funny, dueling pianists, Jeff and Sandey; Hilary Carlip, with straight face, juggling while warbling a torch song ; Cock and Feathers singing and "signing" a song that touched us, romantically, I mean; Amanda Barrett (William’s beautiful daughter) of the Ditty Bops, sang a song her father wrote, Dreaming Away;
J Paul Moore as "Alfie" and his wry legerdemain; The Briton Ensemble singing their popular Renaissance song "co-written" by Paul McCartney and James Hendricks; and Molly Morgan's exquisite belly dance enticing people to rush up and put money wherever they could in her costume, while she kept on dancing and enticing.

I had so much fun selling raffle tickets, and sharing hugs with older, familiar faces while making friends with new ones. It was a privilege to be at this special night: this reunion of old friends. It was amazing to be in a ballroom full of professionals, who are also a unique, extended family, performing with love, with and for one of our own.

I was too young to see Vaudeville, but I saw the Real Thing tonight."

And this from Daniel (Rover) Singer, director of The Briton Ensemble…

Review: Boffo Benefit for Billiam by Rover
"William's Billionaire Bash"
"Ever have that dream where everyone you know is gathered at a Moose Lodge in Glendale, California, watching you perform a vaudeville act you hadn’t done in decades? Or was it actually November 15, 2010? It was, in fact, a massive undertaking to celebrate the love we feel for the legendary William/Billy/Billiam Q. Barrett. Dozens of donated and somewhat eccentric raffle items—pet massage, anyone? His family and friends turned up in astonishing numbers on a Monday evening; and since so many of them are performers, a lavish variety show dominated the evening. Presented in typically slapdash fashion, the epic show lasted till nearly midnight, as a stream of astonishing variety acts took the stage in tribute to Mr. Barrett, whose long career as a hippy clown has brought joy to countless billions of hippy clowns around the world. By the end of the evening we were knee-deep in juggling clubs, rubber chickens, razor blades, ukuleles and hula hoops, with nary a dry seat in the house. Most astonishing—to this observer, anyway—was the astounding agelessness of these supposedly aging friends, who all seem as buoyantly youthful as ever. As a group our spirits are eternally ageless. Congrats and thanks to the scores of participants, and to Billiam, we say, long life and good health. –Rover"
Guest Reviewer: Daniel "Rover" Singer is the founder of the Reduced Shakespeare Company, a former production designer at Walt Disney Imagineering, and a professional bohemian.
.

Posted by Sheehan at 6:31 PM No comments: 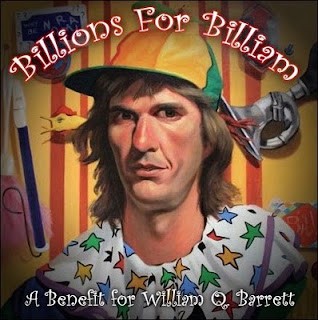 For folks who love Variety Shows.. the opportunity to see some terrific performers all to the benefit of an old friend, William Barrett (whom we called Billy for fifty years) is at hand.
Featured acts include Amanda Barrett (Ditty Bops), The Mums; Cock and Feathers!
When: Monday, November 15, 2010 is the date.
6:30 is the time (show at 8PM)
Where: Moose Lodge #641 357 Arden Avenue (between Pacific and Central) two blocks north of the 134 Freeway in Glendale 91203

$20.00 at the door. All donations are welcome.
No Host Bar / munchies..
Fantastic raffle items will be given away at the intermission

Why? To the Benefit of William for his incurred and mounting medical bills. Cancer is no fun, but the show will be!

Check Billions for Billiam on Facebook for more information.

See you there?
Posted by Sheehan at 12:19 PM No comments:

Another Classic at A Noise Within

Kurt Boetcher’s stark bare bones set allows Neil Bartlett’s imaginative adaptation of Charles Dickens’ Great Expectations to unfold boldly and melodramatically at A Noise Within. Highly theatrical from first light we meet Pip (Jason Dechert) seated in a graveyard: the stage floor laid out with simple lozenges of gray: an apt launching pad from which to narrate his orphan’s story. Moments into his narration, Pip is attacked by Magwich (Daniel Reichert), an escaped prisoner and forced to bring him food and a file to release him from his chains. Though captured soon after, Magwich takes the rap for the theft of the tools and food, protecting Pip because he had acted honorably. This kindness, as we all recall from reading the story, is repaid much later in Pip’s personal journey.

Dickens never told a short story. Or, if he did, it must have been a long one. However, Bartlett’s adaptation nicely moved along by Geoff and Julia Rodriguez-Elliotts tight direction unspools the episodes of Pip’s tale apace. It is a signature of the Elliotts, perhaps, that some things are rushed a little from time to time, especially when we meet Mrs. Joe, Jill Hill, who has always subscribed to the adage that to spare the rod is to spoil the child. Hill’s banshee of a Mrs. Joe is not a tolerant sister, though her more patient husband, (ANW founder Geoff Elliott), Mr. Joe, the blacksmith, who punctuates some scenes with ringing hammer blows, is certainly more kind.

Pip is trundled off to meet Miss Havisham, an at once vivacious and eccentric jilted bride, nicely limned by ANW mainstay, Deborah Strang. Angela Balogh Calin’s costumes are appropriate throughout; especially with Havisham's tattered wedding dress which reflects her moldering wedding cake, now in shambles years after she was abandoned at the alter. Havisham has raised the beautiful Estella (Jaimi Paige) to break mens' hearts. Estella delights in tormenting poor ignorant Pip, leading him on and slapping him down while calling him “Boy.” Which, of course, draws the callow kid to her fall in love with her anyway.

Pip’s adventures continue by his being sent back to apprentice with Mr. Joe. He's then informed that he’s the recipient of a fortune that will enable him to go to London to learn to become a gentleman. This includes episodes with the talented cast doubling and a fine ensemble of supernumeraries who are crisp and dedicated: Darby Bricker, Elizabeth Fabie, Kurt Quinn and Taylor Jackson Ross who move props and literally become part of the scenery.

Mitchell Edmonds may have the most fun trebling as Mr. Pumblechook/Sarah Pocket and Bentley Drummle. The romance that Dickens has with names is equal to the fun that he has with the drama of the orphan and his adventures. The beauty of this production is that the lengthy tome with all its twists and turns pares down nicely to two acts in two hours with a cast who play the story with gusto. Jill Hill does double duty playing the complete opposite from her feisty Mrs. Joe, the pretty Biddy, who marries Mr. Joe after Mrs. Joe’s demise. Kurt Quinn plays Wemmick. Stephen Rockwell doubles as Herbert Pocket and Compeyson.

In the end, we see Pip, back where he’s started: in the graveyard where his parents and siblings lie. He again meets Estella, now more demure.. age has not been so kind and her killer attitude is dimmed, a reunion that we probably could see coming from the get go. Together at last.

A curtain speech before the show announced that a generous benefactor (not Magwich) has come forth to offer A Noise Within a one million dollar matching fund to help complete the expensive process of installing actual plumbing and such in the new ANW Theater in Pasadena. Glendale’s loss is certainly Pasadena’s gain and though this fine company will be twenty minutes further away, they’ll be in a brand new home where Pasadena will embrace them and will also embrace audiences with parking and a more tolerant atmosphere for the Arts. Opportunities for naming things, from the entire lobby to a porcelain throne, are available. As I don’t have to be objective, I very much admire this hearty troupe. I encourage you to see their season of plays and to dig into your pocket, shallow or deep and help to complete the new space in Pasadena in time for the Fall 2011 Opening there.

Posted by Sheehan at 9:47 PM No comments: