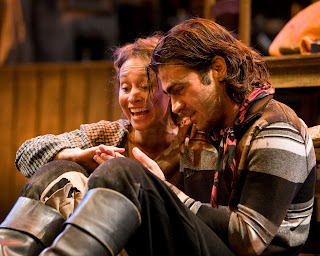 Posted by Sheehan at 7:24 AM No comments:

The Poetry of Pals 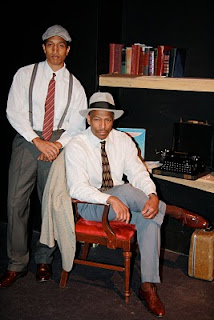 Conceived and directed by Nancy Cheryll Davis, the story spans over forty years of the two poets friendship obliquely discussing shades of homosexuality; the passions of poetry and politics as well as a strong polemic regarding racial discrimination.

Seventeen members of the cast include multiple casting for not only Hughes and Guillen as younger and then older men, but with the supporting cast appearing in many guises. The script leaps back and forth in time, each time announced in voice over accompanied by images of Harlem and Havana (mostly Havana) created by Nathaniel Bellamy. Director Davis keeps the audience guessing with split focus on the overly wide stage. Action in some scenes center stage in pantomime takes unintentional precedence over the important meat of the scene going on far to one side or another. Choreography by Nancy Renee is professional and enthusiastic.

A passionate recitation of one of Hughes’ poems, "The Negro Mother," by Tené Carter Miller (poetry of both men is featured in several scenes of the play) brought a strong reaction from the near capacity audience for Sunday’s matinee.

Over all, however, a diversity of acting styles and the plethora of characters detracted from, rather than added to the presentation of the piece.

Even with the very professionally designed program by Forrest Gardener of 3AM Sound (he also designed sound for the show), it was difficult at times to figure out just who was who and when was when and where we were at any given time.

The Town Street Theatre’s dedication to the promotion of plays by and for the African American community is to be applauded, along with their continuation of their TST Musical Theatre Camp 2010 to be held for local youth from July 10th until August 14th. 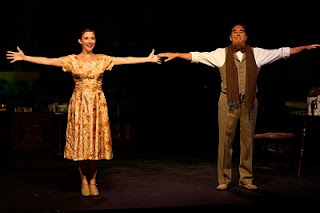 In a curtain speech Beau Bridges and his daughter, Emily, take the stage to a hometown welcome. Beau’s been a member of Theatre West, he says, for at least forty years and this is his first time on stage there. He’s affable and tells the story of how he was introduced to the company by his godmother, Betty Garrett and as a young man did scenes with her. He told the audience that his parents (his full name is Lloyd Bridges III) always supported his being an actor and his dad, Lloyd, gave him, at the age of ten, a copy of Boleslavsky’s Acting: The First Six Lessons. The play, as adapted by Beau and Emily, has been in the works for a couple of years. They designed the set, a well functioning unit that serves as the Teacher’s (Bridges’) study, as well as a movie set, an elevator and the top of the Empire State Building.

At rise The Creature (well tuned Emily Bridges) arrives in The Teacher’s (equally impressive Beau Bridges) study with a burning desire to act. She wants to create art, to live art, to BE art.. The teacher is mildly sympathetic but tells his new charge that Talent is the key to success on the stage .. one must not only become completely observant, but adapt to the nuances of each character one is challenged with and to find a way to Concentration.

In the course of the ninety minute production, we see the Creature expand, contract, fumble and grow. Emily, a Fordam grad, shows that talent must run in the family and under the tutelage her mentor (her proud father glowing under his stage persona) finds nuance after nuance in her work (after some chilling stuff at the top of the show as she limns King Lear.. not one of the daughters, but the King himself), later advancing to a more suitable role: Ophelia. She performs the scene once which sounds mature and well prepared, though she says it’s not right. She then finds grace notes and subtle fineries suggested by The Teacher. She does the scene again that reaches to the depths and heights of Ophelia’s deep and dark feelings. The audience is swept away.

For actors, students of acting and aficionados of the art and craft of theatre the Bridges bring Boleslavsky’s First Six Lessons to life.

The production is dedicated to Betty Garrett, a founding member of Theatre West, whom I was fortunate to sit beside and hear stories of Beau’s early days with the company. Initially, Beau was rejected for membership because he was so young! This, his first effort on the main stage of Theatre West ably directed by Charlie Mount is, simply, a must see. 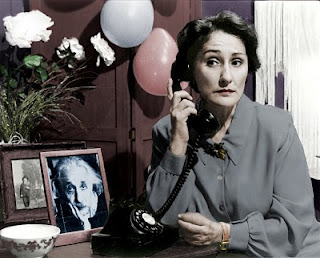 Posted by Sheehan at 1:29 PM No comments: