Review by Robert Roll
Company - Sondheim’s “Into the Oaks”
Don’t let the idea of another regional production of a 45-year-old Steven Sondheim musical put you off. 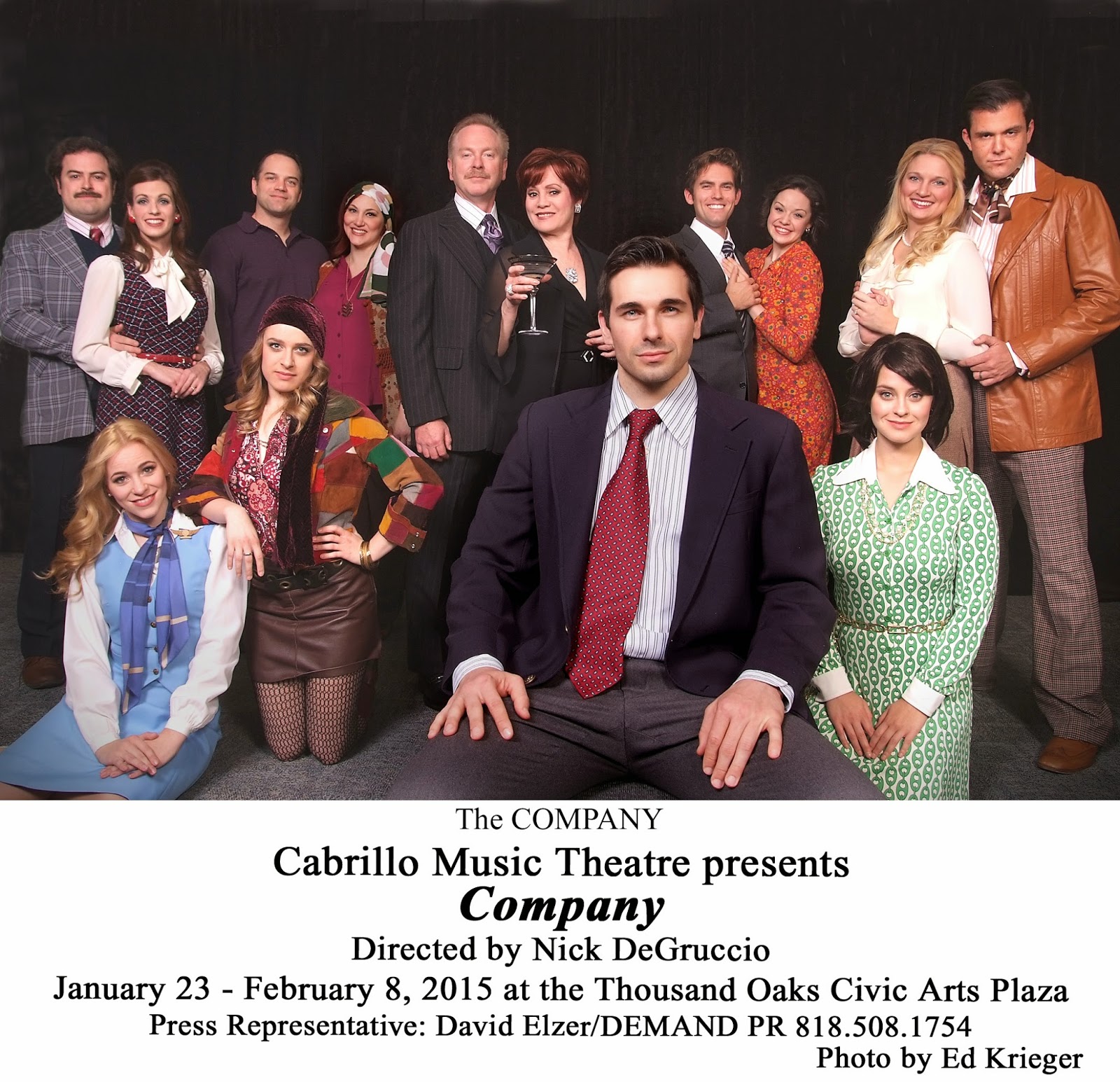 Cabrillo Music Theatre’s current revival of the Tony-bedecked “Company” offers a shimmering evening’s entertainment at the Scherr Forum in Thousand Oaks.
If you know the composer’s oeuvre, this is the one with Side by Side By Side, Another Hundred People, The Ladies Who Lunch, and a half-dozen other hoppy, poppy show tunes delivered by a beautifully blended ensemble cast.
The central character Robert, not so much celebrating his 35th bachelor birthday as dissecting the life that has led up to it, is delivered by Alexander Jon.  Jon’s strong voice serves him well in Sondheim’s soliloquies, as he navigates one of the most twinge-y personas in musical theatre.  This amorphous, uncommitted 70’s guy is really just the pivot man between George Furth’s series of one-acts about marriage and what it does to nice people.
Here is the karate-chopping Sarah and Harry.  Elissa Wagner and Michael Andrew Baker get genuinely physical with some bona fide body slams and back flips in real time.  Later we hang with tightly-strung Jenny and her mustachioed hubby David, lounging with Robert on a couple of authentic 70’s Naugahyde beanbag chairs with a bag of pot.  By the time Robert’s dreamy sexy chorus of current squeezes materializes to harmonize You Could Drive A Person Crazy, the cast and audience have started to party.
Highlights in this show come one after another.  Let’s single out, though, a coloratura turn by Cabrillo first-timer Chelsea Emma Franko’s Another Hundred People, and the damn-she’s-good Getting Married Today pattered to Gilbert and Sullivan perfection by Heather Dudenbostel as Jenny, the potentially runaway bride.
Cabrillo’s Artistic Director Lewis Wilkenfeld is fond of saying “It’s not musical theatre without live music”.  A nine-member orchestra conducted by Cassie Nickols is onstage/upstage for the entire three-hour performance playing with the cast, not at them.  Cate Caplin’s choreography turns this talented ensemble into a Broadway show line that delivers the tappin’ kicken’ goodie goods.
Here is a live show worth seeing.  In the  T.O. Civic Arts Plaza’s smaller (400-seat) venue, Lighting Designer Jean-Yves Tessier’s staccato illuminations flirt against Tom Buderwitz’ muscular set just as Jon’s character Robert toys with his trio of sweethearts.
Drive out to T.O. and see this show.
Company
The Cabrillo Music Theatre
Presented in the Scherr Forum Theatre
2100 Thousand Oaks Boulevard
Thousand Oaks, CA
800-745-3000
www.cabrillomusictheatre.com
January 23rd, 2015 8pm
January 24th, 2015 2pm*
January 24th, 2015 8pm
January 25th, 2015 2pm
January 29th, 2015 7:30pm
January 30th, 2015 8pm**
January 31st, 2015 2pm
January 31st, 2015 8pm
February 1st, 2015 2pm
February 5th, 2015 7:30pm
February 6th, 2015 8pm
February 7th, 2015 2pm
February 7th, 2015 8pm
Posted by Sheehan at 6:40 PM No comments:

Mutant Olive at The Lounge