THEATRE FORTY DOES IT AGAIN

WHAT , I say.. What?? do you get when you cross "Arsenic and Old Lace" with "Murder She Wrote" and turn loose a playwright who ... evidently loves opera? That would be Theatre Forty's World Premiere Presentation of "Death, With Benefits" by John Strysik whose leap into the world of farce with both feet is a confused leap at best. The program lists Mr. Strysik also as the director, but also lists Jeff C. Beck as the director, which may account for the debacle that ensues.

Why "Death, With Benefits" seemed like a good idea to Theatre Forty at Beverly Hills High, leaves me baffled. It's billed as a 'farce' and, indeed, that seems like a decent way to describe it.

Is it directed by Jeff C. Rack? (who also designed the set) and or, the author, John Strysik who is not credited with the scenic design? At rise we meet Ned (Kevin Duluede who doubles later as the very gay hairdresser, Geoffrey). He is Mary's  "son-in-law". Evidently, Ned is an old guy. He walks with a very slow walker and is doughty. The phone rings and confusion prevails. The opening scene is interminable.

Then.. Enter Mary (Susan Demante) and Duscha (Cheryl  David) just back from what might have been a hot yoga session. Duscha speaks with a strong Eastern European accent (not Polack!.) Mary does not. Slowly (very slowly)  the plot unfolds, interrupted by a complaining answer machine voice demanding hot water. Remember answer machines? 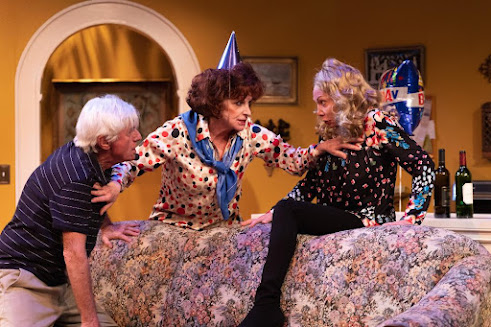 Evidently, based on the true story of how Helen Golay and Olga Rutterschmidt lured a couple of old guys into their 'care' and knocked them off for the insurance money, this play features five actors in seven parts with at least as many different acting styles that director? Rack / Strysik? may have attempted to coalesce into one style (best exemplified by the over the top hijinx of Wino Joe played by Larry Eisenberg). Had the director(s?) done that, they might have had a show that would run as full length in one act with no intermission (no snacks at intermission!) and have let the audience go home half an hour early.

The odd passage of time in the play gives the impression that enough time has gone by for each woman to have at least two bad wigs each.  There are odd lighting changes mid scene that might denote the passage of time?

I'm a generous critic.  I know guys in this play.. What can I say?  Are there moments of surpise and laughter? Yes.  Are there lots of doors opening and closing in a farcical way? Well, there is one door that sticks... and then doesn't. And two other doors. One is for the bike and one is for the alien... . spoiler alert.

Who thought, "Let's introduce attmpted comic mayhem instead of Elderberry Wine and a scheme so weird that even the over the top gay hairdresser (Mr. Dulude) can see through it!" would be a good  idea?

It is simply a really silly plot that unfolds to a very strange conclusion...  at a snail's pace (except for the irrepressible Mr. Eisenberg.)

All the while? Toss in some Tosca and a tip of the mid 20th Century cap  to  Tod Mosel's late forties "Impromptu", which might have given Strysik the idea for the climax of this debacle.

Certainly, the actors...  from time to time are having some fun. And, opera lovers can have brief sing alongs now and then.   The music is over amped!  Ouch.

A suggestion! Had the idea of using Commedia or reached back 350 years to examine the broad farce of Moliere as a matrix for this overwritten script, there might be some actual fun to be had. I teased Phil Sokoloff (the cop and the last "victim", "Bill"), as being typecast.  All any actor can do is the best he/she can under the circumstances.

To his credit, Mr. Rack's set is a nice set.

Posted by Sheehan at 2:28 PM No comments: