Slightly off topic.. There is a crisis at the LA Municipal Art Gallery in Barnsdall Park in Hollywood. The City of LA has the facility on what is called a RFP (request for proposals) in an attempt to privatize the gallery and facilities, making it no longer Municipal. One City Councilman has called the necessary budget, less than two million dollars, 'budget dust.' It is important that the egalitarian access to this venue remain municipal. If you write to Councilman Tom LaBonge or Eric Garcetti simply asking for the Barnsdall Art Park to be taken off the RFP list, that will be a huge help. See below for a scheduled rally in support of keeping Barnsdall Municipal. Please copy and post where you can.. the voices of the people must be heard and this is a terrific way to lift them up. Thanks! Happy New Year!

LaBute is a well known film director/playwright. This is an opportunity to be up close and personal with him. His reputation is wide spread and it seems that 'candor' may be his middle name. Support local theatre and rub elbows with some of the movers and shakers in Los Angeles. Please tell them that onstagelosangeles sent you. Happy New Year!

“An Evening With Neil LaBute”
January 15th at the Howard Fine Acting Studio.

LOS ANGELES – December 30, 2010 –Vs. Theatre Company, which will produce the Los Angeles premiere of Neil LaBute’s The Mercy Seat at [Inside] the Ford this spring, hosts “An Evening With Neil LaBute” on January 15. The acclaimed playwright and filmmaker will take questions from the audience in a discussion moderated by theater director/acting coach Howard Fine.

“An Evening With Neil LaBute” will take place on January 15 at 7 pm at the Howard Fine Acting Studio, 1445 N. Las Palmas Ave, Hollywood, CA 90028. Tickets are $75 in advance and $95 at the door, and include food and drink. A limited number of VIP tickets are available for $125, which includes priority seating and a pre-event reception with Mr. LaBute. Ticket proceeds will benefit the non-profit Vs. Theatre Company, with a portion of each ticket donated to 9/11 Health Now. For more information and to purchase tickets, call 800-838-3006 or go to www.vstheatre.org. 21+ only.

Posted by Sheehan at 8:34 PM No comments:

"greedy" at the El Centro

The Little El Centro Theatre has been active in Hollywood for longer than I can remember: I first saw shows there in the seventies. The work there has ranged the gamut from musical previews to the beginnings of Torch Song Trilogy (the first act was called The International Stud). I don't know the Red Dog Squadron, but certainly applaud this kind of "going for it" attitude that this show may deliver. I'm unsure I'll have time to review it, but this may be one to support. The price is right. If anyone who is knowledgeable about theatre sees this show and would like to submit a review, let Lucy Pollak, Red Dog's publicity rep know and I'll consider it.

Happy New Year! See more theatre in 2011.. By the way.. A Noise Within in Glendale will reprise NOISES OFF! in January. It's an amazing romp. 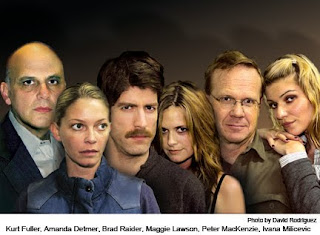 "The more you have, the more greedy you become, you know. And all this crisis is the product of greed. Greed is the dominant value today in the world. And as long as that persists, well, we are done."
– Chilean economist Manfred Max-Neef in an interview with Democracy Now’s Amy Goodman

WHAT:
greedy – the West Coast premiere of Karl Gajdusek's edgy and very dark comedy. Five people struggle with greed, hope, desire and integrity in the wake of an emailed plea for money that promises big returns. Is it a scam or a golden opportunity? James Roday directs a cast that includes Amanda Detmer, Kurt Fuller, Peter Mackenzie, Ivana Milicevic, Brad Raider, and Roday’s co-star on USA Network’s psych, Maggie Lawson.

It is my goal to be an honest critic and at the same time... as much as possible... a booster of theatre in Los Angeles. Personal stuff has me not attending some openings, but I hope to keep readers informed about what's going on that I'm told about. This is pretty exciting, as it was The Pasadena Playhouse / Patty Onagan Publicity who first treated me as a true member of the press. So.. this good news from Patty, I want to share with you and, if you are inclined, make a contribution to the Playhouse. It's a regal old gal... that place. Sure hope they come up with ways to please their basic audience and also move forward with edgy and interesting theatre in the years to come. The upcoming Dangerous Beauty musical will be interesting to say the least. Rent the movie to get the gist and then attend the show if you're as curious as I am.

Here's the current info on The Playhouse courtesy of Patty Onagan:


PASADENA, CA (December 9, 2010) – The Pasadena Playhouse (Sheldon Epps, Artistic Director and Stephen Eich, Executive Director) proudly announced today that they raised $2 million, which was a challenge inspired by anonymous donors’ $1 million matching grant. The theatre continues fundraising efforts with a new $2 million campaign named Fund the Future. The new monies raised will support opportunities for the Playhouse’s advancements including expansion of the next generation of theatre audiences.

"We are thrilled by the outpouring of generous gifts. So many sources have been willing to join forces by quickly and actively displaying their support in helping to reach the $2 million that we raised," said Sheldon Epps, Artistic Director of The Pasadena Playhouse. "The evidence of this extraordinary community backing reconfirms what I always say, 'People care about this theatre.' It is the commitment from our board and our supporters, that ensures us that we have a strong and exciting future and that The Pasadena Playhouse remains the vital and important theatre that it has always been."

Michele Dedeaux Engemann, Chairman of the Board of The Pasadena Playhouse said, "When we met the $1 million pledge, the Board knew immediately that we still needed to have an aggressive fundraising campaign to continue our ongoing efforts to reach our goals. We are thrilled with what we have accomplished since July of this year and are wholeheartedly dedicated to take on our new Fund the Future campaign."

Stephen Eich, Executive Director of The Pasadena Playhouse added, "The unanimous endorsement of this campaign from the Board and staff to raise $2 million tangibly represents our continued commitment to the Playhouse being the premier theatre of Southern California and an important part of the national theatrical scene.”

Contributions for "Fund the Future" can be made online at www.PasadenaPlayhouse.org; by calling 626-921-1156; or by mailing a gift to Fund the Future, Pasadena Playhouse, 600 N. Rosemead Boulevard., Pasadena, CA 91107.
Posted by Sheehan at 10:29 PM No comments:

Apologies to loyal readers. Hope to be out to new theatre productions soon.
Meanwhile, here's an opportunity to see some free theatre.. One night only. Debra Deliso is a talented director whom I've known for many years. If you are free on 12/11/10, please head up to Pasadena for her show. See below. Guest reviews for this show are welcome.


Dear Theatre Friends!
You are cordially invited to an evening of rich theatre stories! This Saturday night at Throop Hall in Pasadena I am hosting an "Evening of Solo Performances." Kaleidoscope Theatre Company is co-producing. 7:00 curtain, admission free, refreshments too! Please click on the link below to read about the beautiful line up of talent!
Hope to see you!
Debra Deliso