The Beautiful People / Rogue Machine Theatre at The Matiix

Why the "A" in the logo on the poster for Tim Venable's "The Beautiful People" is the graphic red Circle "A" becomes evident as we spend some time in  1999 with Alex Neher as "(1)" and Justin Preston as "(2)." 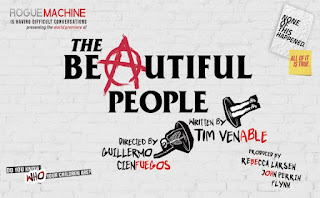 At first blush they are a couple of typical teenagers  chilling in (1's) basement in a middle class home south of Denver.   The guys are pals, but the struggle for dominance may erupt, serving up a little more than ear snapping.
David Mauer's immersive stage design has our audience literally in the room.  It's a grungy basement with (1's) bed, a sofa and another sofa and a television set and a computer desk and a Nerf basketball hoop and a mirror.  The boys.. and they are just boys.. challenge each other; punch each other; discuss philosophy.  (2) does an imitation of President Bill Clinton denying his connection to Monica Lewinski.  He then gives Clinton on TV the finger.
There is an "undertaste"... an undertow,  as the boys jockey for power. "Undertaste" comes from Roman Polanski's film "Rosemary's Baby."  In fact, director Guillermo Cienfuegos, may have been channeling Polanski a bit as the uncomfortable placement of the audience makes the fourth wall pretty much inconsequential.  I have some issues with Cienfuegos's physical staging, but in Polanski's film, we are physically drawn into the intimate space shared by Mia Farrow: her story... in a similar way.
Alex Neher   & Justin Preston
Photo by John Perrin Flynn
There is little objectivity as the boys fight and make up and do the stuff that all kids do: chug a burny soda or fall victim to a really hot pizza roll fresh out of the microwave: too hot!
The story moves sequentially, episodically to its inevitable conclusion.   Neher as (1) plays his mercurial character with love/hate aplomb.  He's honest one minute and a fucking liar the next.  (The language of the play is filled with shits and fucks and sex, so this is fair warning.) Preston plays (2) to out do Neher and in one very dramatic "show and tell" seems to be the champ.
The beauty of this difficult play is that we are drawn in. We get to know the kids. We care about them in various ways. (1) is a manipulator and (2), try as he might, is still a second banana.  We see this in all groups:   The Alpha runs the show. Others may challenge, but as often as not, the Alpha  is always in charge.
(2) reads a chilling essay that turns on the violence that the pop music of the nineties: Marilyn Manson and Nine Inch Nails made millions with.  The play's title comes from Manson's "The Beautiful People."
(1) says, "I live by a different code. I have like, a mission. A purpose. And I don’t give a shit where I go after I die."
Artistic Director John Perrin Flynn and the Rogue Machine Theatre are still working to make The Matrix Theatre a destination for new ideas. The BeAutiful People is an important World Premiere.  Sticky with socially challenging subject matter, we are reminded that Theatre can change the world. We come in and sit down and when we leave, what matters may stick with us.  This one sticks.
Yes.
This one sticks.
The BeAutiful People
Written by Tim Venable
Directed by
Guillermo Cienfuegos
Rogue Machine Theatre

Please copy and paste if the danged link is not working. Go to see this play!

THE LEGEND OF GEORGIA McBRIDE AT ICT

You can't tell the players without a program and with this old switcheroo routine, ICT's "The Legend of Georgia McBride” is perfect for Pride Month. What I love about Long Beach's ICT is the intimacy of the space and how nice the staff is at first blush. Producer caryn desai makes first nighters feel right at home.

Elvis does not disappoint!

Trouble at home? Yes. Casey has used up the debit card to quell a pizza jones and his wife, Jo (Karese Frizell) takes him to task for screwing up the rent payment. And?? And.. she's pregnant!

Matthew Lopez's somewhat loopy play is slightly over long, but the cast and the audience are all having a great time. The story moves along cinematically.  Director Jamie Torcellini's clever deployment of a quick change stage crew as well as an on stage makeup artist, works! We buy the transitions from back stage to on stage to Jo and Casey's apartment without batting an eye.

Showing up for work with a new Elvis jump suit, Casey learns that Elvis is out and Drag is in. Miss Tracy Mills (Jeff Sumner)

Big lip synced musical numbers are bright and colorful and Kimberly DeShazo's wonderful costumes bring the characters to life. There are feathers.

It's a slow transition for Casey from reluctant conscript to becoming Miss Georgia McBride.  Miss Tracy has most of the one liners that include a long list of really horrible puns. One liners and the wonderful device of a guy virtually forced into a dress to lip sync to Edith Piaf crooning "Padam Padam Padam" is passing hilarious. Miss Tracy's lesson in lipsyncing when you don't know the words is far out!

The  ups and down, the conflicts and resolutions, succeed. It's a comedy with a taste of Mickey and Judy putting on a show in a barn. Cleo's on the Beach magically transforms from a beachfront dive to a Happening Drag Show Room just in time for Pride Month. I would like to credit the on stage makeup artist, but I cannot find his name. The transformations are really spectacular.

Lopez has an agenda. He's penned a script that juggles the broad world of Female Impersonation with the shame of a straight male coming into his own as a 'woman'. He lets  us know through an eloquent monologue by  Rexy that 'Drag is not for sissies!' And! To fully express one's self as a Drag Queen is nothing to be ashamed of. Revelations and amazing transformations float the plot with one major stumbling block hanging clouds over Miss Georgia McBride (Casey), but as in any eventually cheery story, the clouds part and the big, big finale has the audience on its feet.

This is a must see, especially for heterosexuals. Misconceptions regarding gender and female impersonation are nicely addressed. To be gay and proud and certainly not apologetic, is part of the theme. "Georgia McBride" is a play with music with strong performances and some magical quick change effects. It has a fantastic stage crew, and is certainly a show for our times.

Please head to Long Beach and see this Legend of Georgia McBride.

The Legend of Georgia McBride