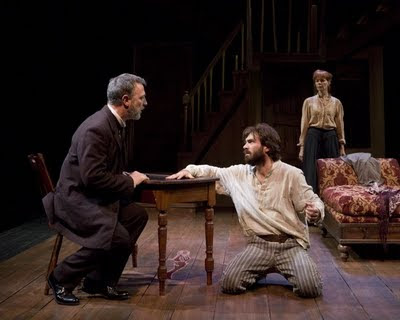 A Noise Within touts itself as dedicated to the ‘Classics.’ With this, the second production in their burgeoning season, Marilyn Campbell and Curt Colombus’s adaptation of Doestoyevsky’s big old novel is a little like Cliff’s Notes, especially to those who have actually read the whole thing. Not having read the Russians, I was interested to see how the Theatre would, with three actors, present the Russian classic. Michael C. Smith’s ominous set featuring steep rickety wooden steps promises what the protean efforts of Michael A. Newcomer (Raskolnikov) and Robertson Dean and Holly Hawkins as an interesting supporting cast deliver.

Porfiry (Robertson Dean) is a detective investigating the death of Alyona (Holly Hawkins) a pawnbroker who has been murdered. Effective flashbacks and dream sequences reveal Dostoevsky’s philosophy regarding the ordinary person / personality vis a vis the extraordinary. Over time, the issue of who may be above the law and who must pay has been discussed in many ways. In the 1500's the pope who had commissioned Cellini to make artworks basically stated that Cellini was such a genius that he was above the law. Who is more valuable? Who may get away with murder?

Raskolnikov, is a student of philosophy and in his investigation of good and evil and his guilt or innocence in the murder is the point around which the story turns. However obtuse the argument of the play, the performances are executed with A NoiseWithin’s well known care. Hawkins and Dean portray a panoply of characters with precision. It’s a primer in classical performance. Christina Haatainen-Jones’ costumes are perfect. James P. Taylor’s lights serve. A gushing glitch of blood allowing Porfiry to track it about the stage needs adjustment after flooding the front row of the audience opening night with a bit more grande guingol than expected.

Over all, this production is an attempt to condense a huge literary effort to an adult stage presentation. Whether it works or not is less important than the effort. Only a purist who has actually read Doestoyevsky may know for sure. I found myself checking out from time to time as the plot unfolded. Even with excellent performances and acceptance of the device of two actors playing multiple parts effectively, it’s still an epic reduced to the bare bones.

So? For the good of all mankind, is the death of one small life so much to give? Does the presentation of an epic novel condensed to its essence make a difference? For students of acting and well tuned theatre, this is an evening worth the effort. A purist may take issue with a condensation, but the curious and the aficionado of creative theatre should take a look.