URBAN STORIES AT THE AUTRY 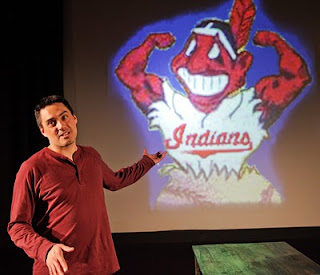 Twenty some years ago I attended a preview of a one man show at Theatre West called A Bronx Tale. It was written and performed by Chazz Palmeteri. Directed by Mark Travis, Chazz brought to life a dozen or more of the colorful wise guy characters he’d met as a kid in the Bronx, New York. Each character had a specific voice and a signature gesture that blossomed with the young actor’s unstoppable energy. His transitions were crisp and immediately identifiable.

Darrell (Shuswap) Dennis’s one person show Tales of an Urban Indian currently at Native Voices at the Autry directed by Herbie Barnes (Ojibway) is similar with a marked difference. It has a theme and characters that Dennis is able to project, but the snap in the delivery and the flow of the piece seemed to lack the energy necessary to capture an audience.

Crude graphitee on bricks appears on the upstage wall, indicating in no uncertain terms that this is a tale set way off the Reservation. Stereotypical Indian images including the Land O’ Lakes Princess and the Cleveland Indians’ Chief Wahoo are then projected as Simon Douglas (Dennis) observes with us, shaking his head and then interrupting the slide show to explain that hackneyed old labels just don’t make it. And, thus, Simon's story begins.

For anyone to mount the stage all by himself for an hour and a half is a major undertaking. Dennis as Simon explains his circumstances at once portraying many, many characters, each of whom he limns, some more convincingly than others, moving through the history of his life’s urban encounters. Whether the problem was the pace or the length of the show is uncertain, but there were moments when it was difficult to figure out just who was who and how it all fit together. Dennis’s portrayal of characters from different tribes must have been right on as the Opening Night audience reacted with enthusiasm.

Simple set by Beowulf Borritt with Christine Plunkett is bare bones efficient. R. Craig Wolf’s lights, given the minimal stage technology at the Autry is very simple, but accentuated scene changes nicely. I was very impressed with costume designer Christina Wright’s credits. Her choice of a T shirt and jeans for Dennis was pretty much a slam dunk.
Native Voices marks ten years of sustaining productions by and about Native Americans.