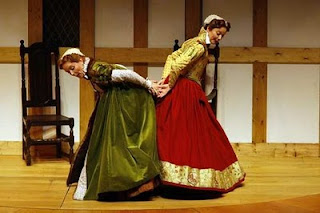 Applause! How many different and indifferent kinds of applause must there be? Gratuitous? Polite? Appreciative? Thunderous? The ovation! To hear British actors handle the language and the attitude of William Shakespeare is truly a feast. If you haven’t been to The Broad Stage in Santa Monica, this would be the time, if you can get a ticket. The beauty of the 499 seat space is that even from the back row one is still in intimate contact with the action on the stage. This company, Shakespeare’s Globe Theatre, on tour from London, plays wonderfully at The Broad because every word can be heard; every gesture, nuance, tick and eye roll is available.

Director Christopher Luscombe is credited with this new production designed especially for The Broad. Scene design by Janet Bird (who also did period costumes) presents on a severely raked stage, a double turntable holds a two story structure, the roof of which supports a five piece orchestra with what appear to be authentic Renaissance musical instruments. Nigel Hess's compositions are grand and the musicians seem to really be having a good time! Through out the play, they supply incidental music and sounds as well as just hang over the balcony from time to time enjoying the goings on.

There is a feeling of comfort and good will in all the company. Sir John Falstaff (complete and unfaltering Christopher Benjamin with credits going back to television’s The Prisoner) takes stage with all the bluster one could hope for. His randy gambols, especially ambitious for a man past sixty, extend to hustling two married ladies at the same time. Most wonderful Mistress Page (joyful Serena Evans) and Mistress Ford (equally conspiratorial Sarah Woodward) receive identical letters of intent from Falstaff and decide to trick him and embarrass him for his hubris.

To condense the plot would be a chore. Suffice it to say that outstanding performances by all the cast, especially Mistress Quickly (Sue Wallace) and completely silly Frank Ford (Andrew Havill) are like (insert your own ‘Breath of Fresh Air’ analogy here!). It’s simply fun and a romp. The language and the story are told with great good humor as evidenced in the final dance with the audience clapping in time and applauding concurrently. Huzzah! and Bravo! were heard at the curtain call.

When writing a rave, I have to slow myself down a little and not sound like a ringer. I invited a director friend of mine who is past presiding patriarch of the Finger Wagging Naysayers. He’s full of knowledge about theatre. He’s written books! He’s directed more shows than he can remember. I really wanted to share this play with him, but he lives what might be an hour’s drive away and it was raining, so he didn’t want to drive all the way to Santa Monica for ‘bad Shakespeare.’ That he would have been huffing and laughing and pointing, as he does when something good happens on stage is a given. That I was unable to coax him to Santa Monica is a shame. I told him I’d try to get the next show to just come and play under the tree in his backyard. He thought that was a good idea!

So… if you have theatre friends who love to hear Shakespeare recited and presented with great joy, find a way to get them to The Broad.

There are only seven more performances. Evening performances start at 7:30 PM. Call the number below or check the web site for specifics.