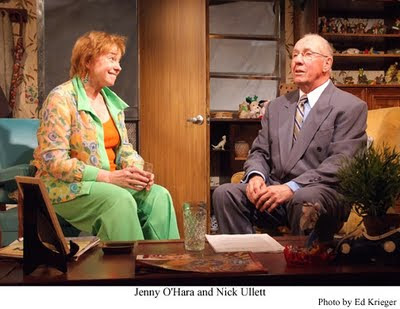 Bakersfield Mist, written and directed by Stephen Sachs is a brilliant new play having its world premiere at The Fountain Theatre in Hollywood. It echoes the real life story of Teri Horton, a retired truck driver, who, in 1990, found a very large canvas in a thrift store in San Bernardino. The dumpster diving lady invested five bucks and her quest began. Over the years, she has been offered, ostensibly, nine million dollars for the painting. To date, she has refused to sell, citing the desire to properly vet the canvas to the abstract expressionist, Jackson Pollock. “Bakersfield Mist” references Pollock's 1950 painting “Lavender Mist” currently in the National Gallery of Art.

Jenny O’Hara as Maude Gutman limns the tougher than nails, hard drinking and smoking former bar tender who buys a painting at a local thrift store bargaining the price from five to three bucks. O’Hara’s portrayal slowly builds but is hampered slightly because the script calls for Maude to smoke. The nasty habit is one that the actor probably does not have and it shows. Certainly, Maude could be tough and hard drinking without faking the smoking. It’s a nit pick in an otherwise beautifully evolving portrayal. As with Horton’s story, Maude greets the prim and proper Art Evaluator, Lionel Percy (finely tuned Nick Ullett). former director of the Museum of Modern Art (it’s in New York, you know) who arrives in a limo to see Maude's spattered canvas. It looks as though the business will take only a few minutes. Indeed, in a ‘blink’ Percy finds Maude’s painting to be anything but authentic. And, then the tussle begins. Maude insists that it must be real: a genuine Pollock. Percy insists that it is not. But, Maude’s desperate search for Truth evokes questions that lead to doubts that lead to an examination of personal taste and the true nature of Art.

Ullett stops the show as he channels Pollock, envisioning the artist as he creates a canvas: laid out on the floor, engaging it passionately. O’Hara’s potty mouth erupts naturally and uncontrollably throughout. Later we see past her crusty shell as she reveals the hardships she has faced, exposing a thoughtful inner woman.

Set designer Jeff McLaughlin’s single wide trailer bristles beautifully with tchotchkes and clutter, setting the scene for the dance that Maude and Percy tumble into. The whole question of what art really is… how it can move the Spirit of Man and capture the soul… unfolds in ways that thoughtfully enlighten. Visions of Yasmina Reza’s award winning play, “ART,” are brought to mind as the discussion of the painting deepens. It’s a pas de deux exploring the question of who really knows best and what, exactly, is ‘good taste’ as the play digs deeper into the characters’ psyches. Sachs directs with a steady hand and the actors bring not only strong comedic touches to the story, but moments of tension, angst and drama.

Ken Booth’s lighting works well except for one odd flare from off stage right. It may have been meant to be the setting sun. Or, it may have simply been a misdirected instrument which drew attention to itself by glaring in the faces of the actors. As the show progressed I thought the light might fade. Eventually, it does, but not quickly enough for that one lone spot. Technical glitches are forgivable, but should never be so obvious as to distract from the play itself.

After watching the Tonys on television tonight, I realize anew that it is only in the living theatre where an audience is directly involved with a once in a lifetime art filled experience. Every performance is unique. These professional actors mount the stage to create their own distinctive form of art. In the moment, O’Hara and Ullett, bring this quirky story beautifully to life. This is the Real McCoy. The Art of Theatre, when presented with such care, as this show is, is undeniable.