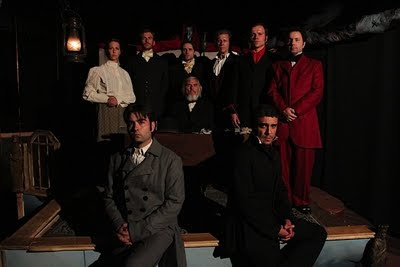 MOBY DICK: REHEARSED at The Lyric in Hollywood.

Orson Welles, born almost a hundred years after the birth of Herman Melville, shared some of Melville’s adventurous spirit that was evident also at an early age. Melville, born in 1819, was just 22 when he signed on a whaling ship and found himself round the Horn in the Galapagos Islands. Experiencing the sea and the hard work of whale hunting likely led to his magnificent 1851 tome, Moby Dick, known to most of us through director John Huston with Gregory Peck as Captain Ahab in the epic 1956 film. Welles has long since been recognized as a genius with his work with the Mercury Theatre and Citizen Kane. His dedication to art and new ideas blossoms these fifty some years later in Whitmore Eclectic’s production of Moby Dick: Rehearsed now playing at the Lyric.

As the audience settles, we observe various members of the cast on the periphery of the stage and learn from the Stage Manager (Director Aliah Whitmore, third generation of the acclaimed acting family) and her silent assistant Andre Verderme, that a rehearsal of the show is about to begin. They are visible off right with live music and sound effects through out, reminding us that this is, after all, a theatrical... circa late eighteen hundreds. Jacob Whitmore’s set and Grant Dun’s lights are purposely simple representations, allowing the audience to make up the difference, helping to create the reality of the tale as the actors take on multiple roles depicting the well known story. Well done costumes are not credited.

As The Young Actor, Dustin Seavey, evolves into Ishmael, who has survived alone to tell the story. Eclectic founder James Whitmore (The Governor, Father Mapple, Ahab), bursts upon the stage with all the charisma that one must have.. as Welles indeed possessed.. to command the scene, first spouting lines from King Lear as Welles himself must have read them. We learn that budget is an issue. Thus, the rigging of the Pequod is very basic with marginal props and lighting to depict the journey into the Atlantic and on to warmer waters to seek out and destroy the Leviathan who has claimed Captain Ahab’s leg. In the actors’ speeches we hear the voice of the playwright. As the actual rehearsal begins, the voice of Melville is brought to life.

The introduction of the players is telling. There is a professional pecking order in the company. Tim deZarn literally steals the scene as The Old Pro, purposely chewing the scenery from time to time. As the characters in the rehearsal come to life, the egos of the actors whom we’ve met are left behind. Also notable is Richard Cox as Starbuck, the attempted conscience of Ahab whose pleadings to abandon the vengeful hunt go unheeded.

Director Aliah Whitmore has whipped her crew into an ensemble who function as a well-tuned machine. Their physical dedication to the show is outstanding. Benches for whaling boats and rag tag suggestions of the Pequod work well.

Cross casting of talented Kate McManus as the Black Cabin Boy, Pip is a challenge. She mentions that there are no parts for women in the play, so she is cast as Pip. Her rendition works beautifully. In fact each of the ensemble members, Steve Madar, Robert Fabiani, Andrew Patton, Michael G. Welch in multiple roles are well defined as individuals.

Why the design did not include actual sails that may have been unfurled from time to time was a mystery to me as the crew hove to with ropes and pulleys as the Pequod found, at last, the White Whale. The strenuous business of the encounter is dramatic and exhausting.

Whitmore’s ensemble is a hearty and dedicated crew. The show deserves an audience.

Thursday through Saturday at 8PM