A SMALL FIRE BURNING AT THE ECHO

The Echo Theatre Company’s production of Adam Bock’s A Small Fire is mostly a hit as it examines what happens when everything doesn’t work out the way we had planned.  Emily (powerful Lily Knight) is a tough little cookie who runs a construction firm with an iron glove.  She banters with Billy, her foreman (Darrett Sanders who shines), laying down the law regarding getting the job they are working on done properly.

Understanding that this play concerns the issue of a strong woman with tough opinions and a firm personality is a good thing to know going in.  Initially, it seemed as though Ms Knight was having trouble with lines, when, in fact, she was playing the issues that were yet to come.  It’s a tour de force performance, to arc from the Alpha person on the job and even in her household to becoming almost totally dependent as her infirmity advances. Husband, John, well limned by Michael Mantell, rises to the occasion beautifully.

A highlight of the piece is a scene that has little to do and at once a lot to do directly with the plot. It reveals itself in analogy to virtually rescue John from his own issues and Emily’s.  Billy races homing pigeons.  In the scene where he and John are anxiously waiting on a rooftop for Mister Buddha (Billy’s prize racer) to come in from South Carolina, the story is elevated to an unexpected height. Billy’s revelations about his own life and losses parallel what we see in store for Emily and John. 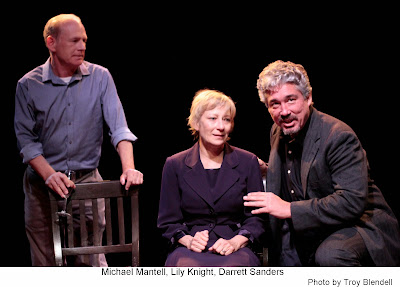 Factor in Emily’s harsh criticism of her daughter, Jenny’s (nuanced Mackenzie Kyle) choice for a husband (he imports cheese!) and the inability of Jenny to cope with her mother’s infirmity, we have a peek into the angst that follows in the lives of people who love one another and may just lack the ability to cope with tragedy.

Under Alana Dietze’s subtle direction Bock’s script is tight, but motivation for some issues still remain a mystery to me.

The Echo’s space at The Atwater is wide.  Amanda Knehans’ spare multipurpose set features appropriate lighting by Matt Richter that guides us seamlessly from one scene to the next. A fifth “character” that helps to move the plot along is Corrinne Carrillo’s well textured sound effects and music that punctuate throughout the piece literally buoying it up. I’m still mulling the climax of this play where Emily and John literally come to grips with dealing with the dilemma that her illness has thrust upon them.

The character of Billy is double cast so a repeat viewing may be in order.  These are highly skilled actors totally engaged a very interesting story.  See this one.

A SMALL FIRE
By Adam Bock
The Echo Theatre
At The Atwater Village Theatre
3269 Casitas Avenue
Los Angeles, CA 90069
Alternating with Row After Row
Through May 31, 2015
With performances at 4PM and 7PM
Both plays may be seen as a double feature
Tickets and information:
310 307 3753
www.echotheatrecompany.com