William Inge’s 1953 Pulitzer Prize winning play, pre Feminist and post war, sweats into Labor Day with the sound of an inbound freight.  The Potts family and the Ownenses share a back yard. Robert Selander’s terrific set is a nice reproduction of a modest home complete with tree and sky and a swing.  Kitty Swink as Helen Potts, a single woman in her middle age who tends her aging mother, enters in curlers and a house dress.  The Potts and the Owens have been neighbors for a long time and convene with casual friendship. Labor Day is coming and with it, on that train that just blew through, some trouble and some changes.  The simplicity of the playwright’s message may not have seemed so simple sixty years ago when women of a certain age had expectations of them.  Matriarch Flo Owens, senses trouble when she sees Helen’s new helper.  Flo rents rooms to teachers and raises her two daughters. Millie (Conner Kelly-Eiding) is a feminist in waiting as she reads Carson McCullers’ Ballad of the Sad Café.  Elder, prettier sister Madge (Jordan Monaghan), becomes the eye of the hurricane coming closer as the picnic comes together. 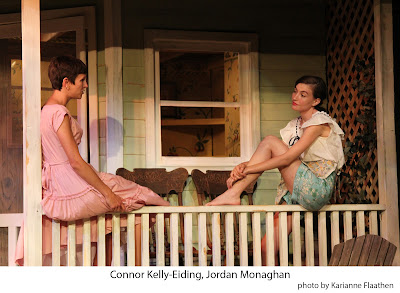