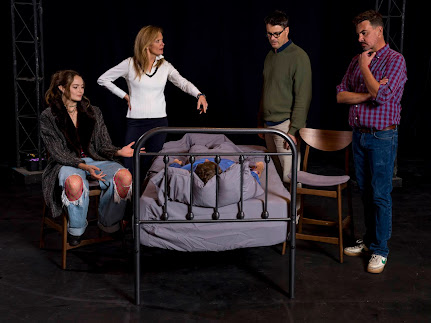 Stevie-Jean Placek, Amy Moorman,
Casey Sullivan and Conor Lane
(Ethan Niven in bed)
Photo by Frank Ishman
THE    SOLDIER DREAMS
BY
Daniel MacIvor
This will be an odd post unless I figure out how the alignment can be  justified.  "Justice?"  Redemption? The former may not factor into MacIvor's play, but redemption might.
The way that  Open Fist presents a play is always unique and a joy to review.  Live theatre is personal and invigorating and worth while. We must be with others. To be with the audience.  This gives us perspective.  There are laughs and ironies that really must have a response. We were a small audience. The applause at the dancing climax was hearty. Deservedly so.
The  odd hour (4PM) for the opening of this play (which will combine later with MacIvor's "Never Swim Alone".. good advice) puts us at a sort of matinee.  It really doesn't matter because we enter into the dark:
The lights come up.
We're in another land.
In fact, we are in Dreamland and the land of the deathwatch.
In her curtain speech, Carmelia Jenkins as Nurse Nancy the Nurse quietly relates C19 reminders and directions to quick exits : "just in case.'
Mostly, I can do without a curtain speech.
This one made me feel like I was on a Frontier Airlines quickie where the passengers mostly attempting to open a bag of peanuts, instead of learning how to save our skins should we
crash into the ocean.
David (David Shofner, the dreamed David) introduces himself and his situation. We meet his two sisters, Judy (Stevie-Jean Placek) and Tish (Amy Moorman) and Tish's husband, Sam (Casey Sullivan) and David's lover Richard (Conor Lane in a strong turn)  on deathwatch at dying David's bedside. The family dynamic is highly charged.  This is a good thing. Charged is good when waiting for a loved one to die in a play written perhaps for the eighties;  the looming spectre of AIDS
and those sad times remembered.
Jan Munroe's simple set and Matt Richter's lighting (which almost becomes another character in the play) serve well. Director Amanda Weier has chosen to make  Munroe's  wide playing area into a sort of tennis court where the audience must  swivel  back and forth from time to time to take in all of the visuals.This was distracting to me.
"The Soldier Dreams" comes from a quote in the text where, in a flash back/memory, a younger David has encounterd the Student / German Doctor (Schuyler Mastain, whom I shall call Fritz). The sexual tension  in the expository scenes return us to, perhaps, how David  may have come to such an end. Fritz's German accent made much of his dialogue difficult to understand, but the quote, "The Soldier Dreams..  but the war goes on," sticks.
Of dying David (in bed Ethan Niven) we see only a tuft of hair just above the headboard allowing the dynamic of his family to relate to him and to one another easily. Now and then we hear a moan and the words "Ottawa" & "German Doctor" from the mostly comatose  David: clues to his demise?
More exposition comes with MacIvor's beautiful monologues from each of the death watch players: Tish explaining her bond with her younger brother using ASL finger spelling to communicate and do an end run on their strict father's 'rule' about talking at the dinner table.
Hip kid sister,  Judy, relates her bond with her gay brother: having fun. David's lover Richard's discussion of the open relationship he shared with David is heartfelt. Sam's well played discomfort and ethos surrounding the whole of the time that is coming, each expertly rendered.
A couple of performances need assistance. Make no mistake, however,  this is a moving and well executed piece that plays smoothly. It really needs an audience to inform the players where the funny stuff is. Today's audience was small.  Sometimes I'll be asked, "Was it any good?" and for this one I need my somewhat stock answer,
"I'd see it again."
Apologies for this odd format.  In editing, I'm finding that I kind of like it.
Please see this play.
Tell the Open Fist that onstagelosangeles recommended it to you.

For tickets, reservations and information,

• Proof of vaccination required of all patrons.
• Admittance limited to ages 12+.
• Masks required throughout the performance.
• Open Fist Theatre Company ensures that theater ventilation systems are up to the
recommended standard for COVID-19 protection.
• As long as the rate of COVID transmission in Los Angeles County remains “substantial,” household groups will be separated by six feet on all sides.