DETAINED AT THE FOUNTAIN 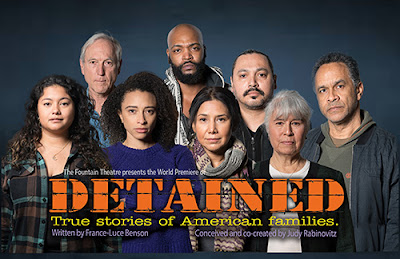 WORLD PREMIERE  of DETAINED by France-Luce Benson sets The Fountain Theatre on the road to polemic importance again.  The Little Theatre that Could and Can brings exciting and meaningful art to Los  Angeles, whether we like it or not. Strong ensemble acting and a meaningful script coalesce on Sarah Krainin's stark set amplified by Matt Sosin's unique video design: These are the true stories  of detainees unfairly imprisoned.

I started to try to match the actors with their roles, but instead will mention the memorable performances and the characters who lived them.

Amadou, a tall black actor, limns an energetic Gunian who, on coming to the United States at the age of three, hears of the American Dream and as his native culture also believes in the importance of dreams, still searches for the American version.

Melida Ruiz is days away from her American Citizenship when ICE comes knocking. She shows her passport, green card and other credentials, but is carted off because of a twenty year old situation where a minor indiscretion and the advice to plead guilty and pay a fine was the best way to resolve the issue. Melida attended trade school and leanred carpentry. She is a roofer!  Her daughter, Mercedes, is a pregnant outspoken teen who, with Melida in custody, delivers her baby without family support and points up the stringent rules in place to make it practically impossible to visit her mother.

Flashy video with some hand held scenes are impressive but distract a bit from the message. Other tech, typical of The Fountain's dedication to putting the money on the stage with professional sets, lighting and effects over all does not disappoint. An interesting adjunct to the video of the performances from time to time is an active live feed of the audience on the upstage wall.

Every immigrant's story points up the initial information that the original laws regarding  immigration to the United States was formerly in a pamphlet that would fit in one's pocket.  Each actor then presents the current code that fits in a binder over three inches thick and must weigh five pounds!

Warren sites his love of the US Flag and how after being in the United States for a short time, served eight years in the military. He was a highly decorated soldier. He presents his actual uniform with medals and decorations that mean nothing in the face of over 900 'rules' that bind the hands of presiding judges.  Judiciary discretion is out the window, when, in the past, a presiding judge could evaluate the character and substance of someone brought before him/her and find a way to be fair.

I repeat the term "polemic"  to point up the obvious bent that this play intends to present in a strong condemnation of an unfair system. It is important to remember that art has ways of inserting itself into our society that may often make a difference. The tone of the audience on exiting the theatre buzzed with the information that we had all just experienced.

France-Luce Benson, who conceived and co-created "Detained" with  Judy Rabinovitz, becomes a character in the production. She addresses the audience and essentially dedicates the piece to her father, who, as an immigrant, gained the respect of community for his work with detainees.

Characters come to life with simple costume changes. The bright orange jumpsuits they are forced to wear are identical to prison garb that felons and true criminals are clothed in.  When appearing before a judge, often on video, handcuffed and shackled, the delineation between detainee and  a person charged with a crime such as murder blurs.

Social and Political activism movements all start with an idea. This idea: that human beings who have made their way into the United States and become tax paying, law abiding and involved citizens regardless of their official citizenship, are being held without bail, without legal advice because many are simply without funds. Unlike those charged with a crime who may have an attorney appointed and opportunities for bail is curtailed in five pounds of 'laws' that have been mangled to suit the political agendas of folks who have forgotten that these human beings are the victims of unfair and uncompromising rules. That's a long winded way to say, this situation must change.

A call for action with the dumping of the huge binders closes the performance, but the hope remains that these stories open the eyes of attendees with an aim to change our current situation with intelligence, compassion and fairness.

Director Mark Valdez allows the play to be as intended:  presentational and personal.

"Detained" deserves an  audience.  Go!  Invite your friends. Pass it on.