THE PLAY YOU WANT AT THE ROAD MAGNOLIA

The Play You Want By Bernardo Cubria is a theatre person’s play.  Home Town Opening Night Adrenalin was flowing well before the curtain went up at the Road Theatre on Magnolia.

Cubria’s strong statement about life as a playwright bubbles with angst and energy as Bernado (Peter Pasco) sits awkwardly profile with his agent Chloe (Natalie Llarena). He needs a production. He writes about Mexican Clowns.. from the heart.  Bottom line is that Barnardo has got to get a show up or Chloe is quits. Marital angst blossoms when his wife, Vera (Chelsea Gonzalez.. doubling in other parts), confronts Bernado with the realities of fatherhood and family. In the face of what looms as success for Bernado.

Brian Graves’s bulky set lumbers here and there to create the various abstract venues where:  lo and behold!  a silly story Bernardo recalled about his abuela and tamales that he jotted down on his phone while sitting on the can whisks us away on a journey from obscurity to:

First:  a reading at the Public Theatre! We meet the Yalies! Oskar Eustis (Stewart J. Zully) rushes the show into production.

And then, Lin Manuel Miranda (Roland Ruiz) pops in to tell Bernie that he’s on his way to Broadway..   Cubria in real life has a resume of credits as long as tu brazo.  He’s written for TV! In the spirit of the Mexican Clown "The Play You Want" exposes truths wrapped in farce.

It is all rolled up into : Applause.

The beauty of this piece is the amazing transformations that the cast of seven talented actors facilitates with grace.

Jonathan Nichols as Gilbert Cruz is bravado personified and later as Alfred Molina, is having way too much fun.  Cruz (a real life ‘working’ actor, whom I met recently on Facebook!)  appears in a Tequila Dream to Bernardo to discuss how this is the playwright’s opportunity to give "what for" for the Mexicans. Don’t fuck it up.

The protean skills of each of these actors has the audience in their collective palms.  A brilliant turn to create Pablo, the two year old son of Vera and Bearnado, is played with a puppet brought to life by  Roland Ruiz.. remember him as Lin?

The success of "Nar Cocos", a loopy story of Bernardo's Abuela (Presciliana Esparolini) we experinece at the beginning of the show, is expanded and then with the input of stars Gloria Estafan (Esparolinia again), JLo (in a great blonde wig Natalie Llerena again) and aforementioned Nichols as Molina, the egos rock. The send up rocks. As director  Chay Yew (Christopher Larkin also Sam Gold!) gets his 'bitches in a row' stroking the hair of Mija (Natalie Llerena  who comes back as JLo) who is not so sure she likes it.  Beautiful moment!

Enter the umpteen Tony winning producer, Scott Rudin (Stewart J. Zully). We learn that this show, to really draw the audience,  must include a Baby in a Cage.  Compromise?  Si Señor..

Lately, I've been taken to task for mentioning moments in a play in what is essentially a great review (which I intend this review to be!)  that I think could be improved.  The play has a moment where something happens in the dark that may have been a missed light cue, but screwed up the logic of what happened next.  Your assignment, and I hope you will take it,  is to to see this great piece of theatre and see if you can catch it.  Good luck.

Parking under the theatre is available.

THE PLAY THAT YOU WANT

The Road Theatre on Magnolia

Special group rates available for parties of 8 or more.  For tickets, please call 818-761-8838 or visit www.RoadTheatre.org to purchase tickets online or to view complete schedule. 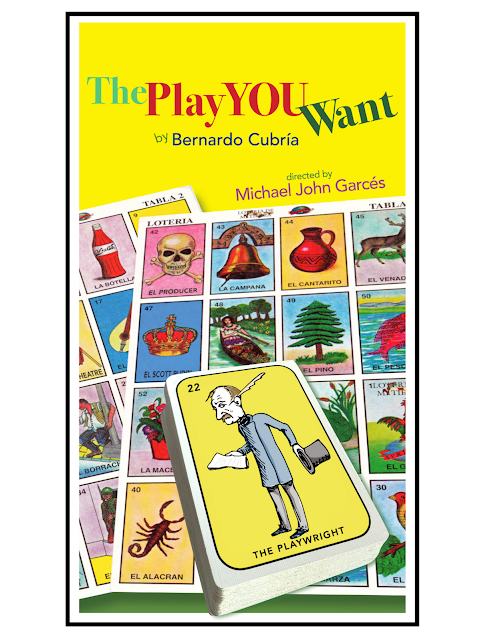