BEACH PEOPLE AT THE CITY GARAGE AT BERGAMOT STATION 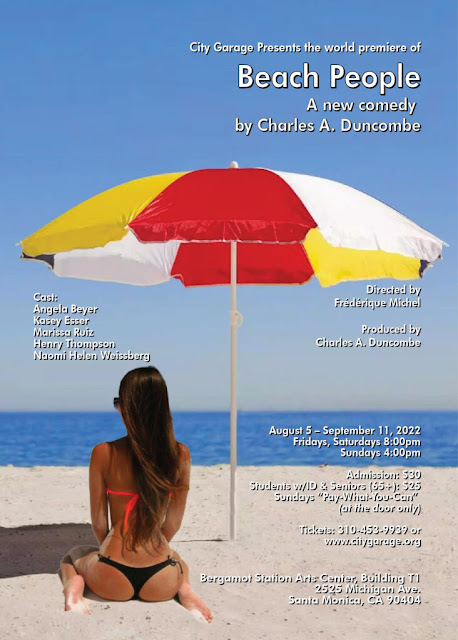 Timing is everything. This we learn from the handsome bartender, Rex (Kasey Esser),  near perfect in his red bikini whom I'll get to in a minute.  I've said in the past that my reviews are actually a broad report on my experience of the theatre when I go to see a show.  Tonight was a real experience.

I owe a huge apology to ,the playwright / producer / production designer Mr. Charles A. Duncombe and the patient  director, Frédérique Michel and the terrific cast of "Beach People."  I got lost on the way to the theatre and rolled in just at curtain time.  It's embarrassing. I am truly sorry.

That said, The City Garage: announced in Red Neon! at the far end of Bergamot Station in Santa Monica is a gorgeous jewel box with a comfortable seating arrangement, just the right size for this World Premiere Experience. Apologies to the audience for my awkwardly bumbling in and losing the contents of the Press Kit all over the place.

But! What about "Beach People?" Take about a pound of Pirandello and a pinch of Beckett,  add zest of Zen and.. and.. then start the discussion with what turns out to be the second act.  Blend , hot Existential Angst.. shake well.. add more angst and try to figure out what Rex, the bartender, is doing as he stacks Jenga blocks on his bar.

We meet the apparently married couple: Anna (Angela Beyer) and Paul (Henry Thompson),   lounging on the beach. It is a hot summer day on Duncombe's beautiful set.

Whoa!!  Anna is spoiling for a fight!

Toss in a gorgeous  teeny weeny string bikini filled to perfection by Diana (Naomi Helen Weissberg) and beneath a sky filled with beautiful scudding clouds, we have Lift Off.

Let the playwright's philosophy filter its way into the mix as he evidently becomes his own shrink. That said, the challenge now comes to director, Frédérique Michel, who has taken what is essentially a talky roundabout discussion of "what's it all about anyway?" and keeps it moving as we meet the text head on, thanks especially to an alliterative diatribe perfectly slammed by Angela! Masterful.

Billed as a farce, be ready to define and defend your own essential philosophy of life while either nodding in agreement or scratching your head as Duncombe's notions about infinity and the essence of 'Essence ' surface and stew...  more or less...  in their own juices.

Frederique Michel's direction of her actors in what is essentially a static and intellectual conundrum, reminds of Beckett and the existential errand of Waiting, especially in the second half which tells the story that we got the gist of in the first half...
Are you with me?
Paul and Anna bicker. To Anna's chagrin, Paul engages the gorgeous Diana with a simple explanation of the endlessness of Infinity.
Patience and a fine tuned ear may catch moments of personal truths as they flitter by.
Life?
What IS it all about?
What is Happiness? Well we may ask.
In Act II (the show runs without an intermission) we learn how Paul and Anna 'found' one another.  The notion of serendipity and carpe dieum,  prodded by Rex as he coaches Anna in her pursuit of Paul, questions the business of what happens by design?  What by chance?  Or..could Design actually be in charge of Chance?
Where would I have been had I not opted to drive to Santa Monica for the World Premiere opening of this terrific show? (Well, I would not have been late, that's for sure.)  The actors are all having a terrific time and thanks to director Michel, their timing works nicely with a really, really impossible alliterative monologue by Anna and a melt down by Paul which brings the couple truly together, making for an  opportunity for us to question our own philosophical trip.
Also? What's up with Rex and his Jenga Blocks?
The Metro stops directly across from the theatre.  Take a ride and don't miss this challenging and very enjoyable show.
Cast:
Angela Beyer  :  Anna
Henry Thompson  : Paul
Naomi Helen Weissberg : Diana
Kasey Esser : Rex
Beach People:  World Premiere
by Charles A. Duncombe