ANATOMY OF GRAY at Open Fist 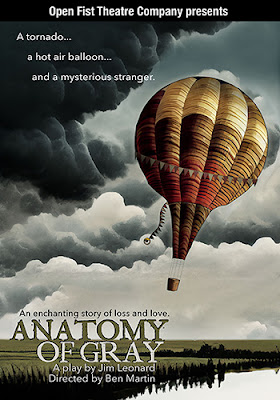 It's the 1800s. Gray, Indiana.  Perfect for our 21st Century we find ourselves in a clash between Faith and Science.  Promoted as The Wizard of Oz meets Thorton Wilder's "Our Town",  June (Rebekah Paugam) addresses the audience. It's June's story. She's fifteen. She is bored and she is restless.

Preceded by his shoe, the wind blows Dr. Galen P. Gray (Jeremy Guskin) into the tiny town of Gray. Is Gray's arrival an answer to a prayer? Does prayer change things?   Life and death issues ensue. As Pastor Phineas Wingfield,  Alexander Wells spends a little time standing on his head to attempt to pass a stone, adding welcome physical activity to the talky piece.This preceded by amusing dropping trou by the pastor and the doctor.

The fourth wall comes down and mostly stays down. The device works.

The bare bones set with an installation of platforms and a bench that becomes a canoe,  stands against a wonderful painted backdrop by Stephanie Crothers that is, to me, fine art.

The double casting for Anatomy of Gray is a mixed bag.  Open Fist members step up to the plate and once the interesting accents mellow out a bit, the actors bring home a story that may turn on our current epidemic or the AIDS plague of the past.  Fear and loathing of the new doctor echoes how a pandemic can set a community on its ear.

Our narrator, heroine, fifteen year old June takes us back to hear the story of a girl who looks a lot like her!   The actors are all fully committed and with  unrestrained energy. They deliver the presentational text in two short acts.   I asked the director, Ben Martin, what attracted him to this play.  He said he likes a story and that this one from 2006 has community appeal. This play certainly tells a story and there are moments in this production that will appeal to the community, much as community theatre has done for years.

Anatomy of Gray by Jim Leonard