The Adventures of Pinocchio / Deaf West 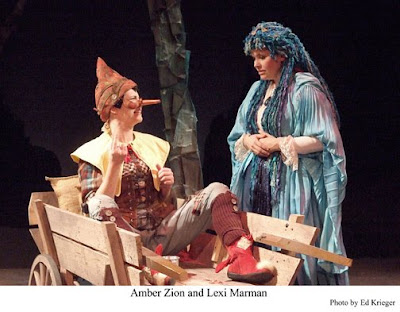 The current Deaf West production of Carlo Collodi’s classic is neither fish nor fowl. Director Stephen Rothman and the talented members of Deaf West Theatre Company, renowned for such presentations as Big River and A Streetcar Named Desire, have ventured into the land of children’s tales with mixed results. Admirably, deaf and hard of hearing actors present the story with one actor playing and signing the physical character and a hearing/speaking actor presenting the character’s voice. Signing Pinocchio, played by Amber Zion, is in a colorful costume while Pinocchio’s voice (Darrin Revitz) is in an almost identical costume in subdued colors. Not all the actors are doubled in this way. Some sign and also speak. Some sign as another actor speaks. Over all, the device pretty much works.

Walt Disney’s 1940 animated movie has indoctrinated many generations of us with a somewhat homogenized version of Collodi’s original story. The dark side is present in Deaf West's version from the outset. After being created from a rather imaginative tree branch, the puppet is just about as naughty as a kid can be. When Talking Cricket (Vae, who doubles as other characters as well) bounces in to tell Pinocchio that he needs to get an education and be respectful of Geppetto (Matt Henerson), the puppet chases her out the door and kills her with a big old mallet! In Act II the Ghost of the Cricket comes back to give more advice and gets the boot again.

Announced as a Commedia dell’Arte version of the story, I found traditional archetypes from Commedia lacking. Certainly, Puppetmaster (Henerson), the owner of the Magical Puppet Theatre is bombastic enough to be a Pantelone and Pinocchio himself a trickster like Harlequino. However, Commedia is an art form that calls for specific gestures and postures. In the entire production there was only one attempt (by The Puppetmaster) at a lazzi: a broad set theatrical piece that defines and expands the character.

It may be a trifle unfair to expect a full on Commedia presentation, but this is the issue of what this show really wants to be. The actors are all on the same page, in the same production, so to speak and some particularly outstanding. To benefit the deaf audience, the music (by Joe Cerqua) is wonderfully cranked with heavy bass that literally vibrates the entire audience. The issue, for me, is that this story is slightly lightweight for an adult audience and may be too heavy for kids.

Some outstanding performances may be worth the effort to go to see this show. My favorite was THE RABBIT OF DEATH (James Royce Edwards, also multicast) who rabidly explodes onto the stage in the second act, after a couple of bad guys (Lexi Marman and Vae) have literally hanged the puppet from a tree, effectively almost killing him. The Blue Fairy (also dead / also Lexi Marman) is wonderful. She wants him to take his medicine and the puppet refuses until menaced by the RoD!

As a fan of this company and appreciative of the hard work they have produced for twenty years, I want to applaud their effort, but would have liked to see the production presented either more in a classic Commedia style, and even darker. Or, even lighter if intended for a younger audience.
The Adventures of Pinocchio
Adapted from Carlo Collodi’s story by Lee Hall
Deaf West Theatre
5112 Lankershim Blvd.
North Hollywood, CA 91601