A House Not Meant to Stand / The Fountain 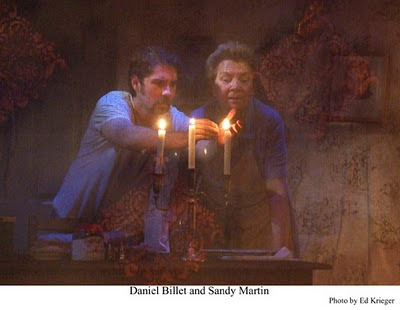 A House Not Meant to Stand / The Fountain Theatre

Tennessee Williams may be the most notable American playwright in the twentieth century. His Streetcar and Glass Menagerie flow like honey and salt from the troubled spirits emerging from Williams’ rich imagination. He had an ear for the language of lost souls, at once poetic and pithy. In the current production of this last of the playwright’s plays mounted in the West Coast Premiere, by Simon Levy, long time artistic director of The Fountain, we meet more gothic characters who are sick with grief, filled with bombastic hubris, sexually frustrated and bigger than life. The poetry is not as rich as what we’ve heard in the more well known plays, but none the less, in the Fountain’s presentation, we are immersed in trouble and strife. The moldering home of Cornelius and Bella McCorkle is literally falling down around their shoulders.

Jeff McGlaughlin’s grubby living room and dining area extend to embrace the audience; reflecting ages of neglect that, for reasons not really explained, the leaking roof has not been fixed; the peeling wall paper exposes lath and one can almost smell the mildew and the mold. We expect to see vermin racing through the living room, but there are only memories.

Chips McCorkle is dead and Cornelius (Alan Blumenfeld) and his wife, Bella (the excellent Sandy Martin) slog in from Memphis where they have just attended Chips’ funeral. Upstairs, Chips’ near do well brother, Charlie McCorkle (Daniel Billet) can be heard in a sexual romp with his soon to be Baby Momma, Stacey (literally moist and fecund Virginia Newcomb). Cornelius is in bombast mode that seems to permeate the cast from his very first entrance and stays there for most of the play. In a small theater, shouting at the top of one’s lungs with little variation becomes strident and must be a burden for all of the actors. Only Stacey whom we don’t really meet until the second act attempts some variation as she eludes the horny Emerson Sykes (equally bombastic Robert Craighead) as he pursues her around the living room furniture.

Whenever a plot discusses hidden money and a shotgun is produced, dramatic tension level rises considerably. In delusions of grandeur Cornelius has aspirations to run for public office. If only he could get his hands on the Dancey money (perhaps a family myth from Bella’s side?). He is convinced his pre-dementia wife is hiding the stash from him. When elected he could become influential and give Charlie a cushy job and grant favors to his cronies.

This is pure Williams. Occasional asides break the fourth wall. Jessie Sykes (perfectly cast Lisa Richards) explains her recent cosmetic surgery and imagined fears regarding a sex fiend loose in the area, whom we suppose she would feint directly toward as she sighed “no no..”

Program notes discuss the business of the “Southern Gothic” of which Williams was a past master. These archetypical creatures, the blustery patriarch, the faded Southern mother, the ambitious but ineffectual son, delusional others, are all here. As in The Glass Menagerie when Tom’s father is mentioned, his photograph glows with memory, Bella has Charlie hang a family photograph in the scrimmed off dining area where, when examined with lighted candles, the family appears in ghostly black and white, fading as the candles are taken away. Later, as Bella’s failing mind runs her out the door to collide with a car in the rain and then comes back inside, she imagines her three young children projected into the dining room, taking their places at the dinner table, through her demented vision.

Williams’ ability to create strong characters is at work in this piece. My issue is mostly with the direction… or the actors seizing their own lead to shout the dialogue and keep the action at an almost fever pitch from the get go. Though no one would allow that Williams is ever very subtle, it seems that finding the peaks and valleys of this play would make it more enjoyable to watch. Director Levy’s ability as a director is well known. If it was his intention that the energy of the cast to be dialed up for much of the play, perhaps finding a few subtle moments might be an idea. The entrance of Emerson Sykes matched McCorkle’s bombast line for line, exhausting any chance for understatement.

Sandy Martin’s Bella virtually stops the show with her description of being in the room with her grandfather at the moment of his passing. This is a show that deserves an audience and as a Williams play that has been only marginally explored, takes the notion of Southern Gothic to the wall with all its might. Uncredited shady characters come looking for Sykes that seem a little out of place. One of whom we meet again as a tall bearded cop we might not expect to see in Mississippi in 1982. Chip Bent’s Officer “Pee Wee” Jackson adds a nice touch in the second act.

Over all this is a show to see and judge for one’s self. If you love southern accents (collectively all just fine) and Williams’ strong archetypes and a well mounted production, except for some highly accentuated volume... see it.


A House Not Meant to Stand
by Tennessee Williams
The Fountain Theatre
5060 Fountain Avenue
Hollywood, CA 90029 (East of Normandie on Fountain)