Desire Under the Elms at ANW 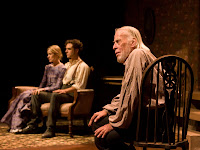 In the description of the set for Desire Under the Elms, Eugene O’Neill describes the scene poetically: "...a farm house needing paint with two huge elm trees framing it. They bend their trailing branches down over the roof… to protect and at the same time subdue… like exhausted women resting their sagging breasts and hands and hair on its roof…” Doesn’t sound like a lot of laughs.

Written in 1920, when O’Neill was just 36 years of age, this modern tragedy echoes the classic Greek drama Phaedra. A seasoned theatre scholar once told me that everyone cribs from time to time. O’Neill’s effort is, indeed tragic and rambles its way to a sad conclusion.

The tyrannical Ephraim Cabot (William Dennis Hunt) shows the power of age and religious conviction. He has ruled his domain, a hard scrabble New England farm, for fifty years. Ephraim’s stern exterior, a reflection of his stony soul rules with an iron fist. Jason Dechert plays Eben, a clever and on again, off again fellow with confused emotions and a plan to keep the farm for himself.

At rise, Ephraim has abandoned the family farm leaving his two sons, Simeon and Peter, (Christopher Fairbanks and Stephen Rockwell) from his first marriage and his son by his second wife, Eben. Eben persuades the brothers hit the trail for the Gold Fields of California by buying out the brothers’ shares and sending them on their way. Suddenly, Ephraim returns, having married the young and beautiful Abbie (Monette Magrath), who in a confusing love/hate beginning falls for Eben and under the influence and elms, is impregnated by him. A son is born and Ephraim is allowed to believe the child is his, becoming his heir to the farm. Adultery evolves to an even darker hue. The desire of the flesh and the avarice that turns men… and women into lustful greedy people foments into loss for all involved: a tragedy in the classical sense.

Andre Balogh, the Fiddler, beautifully enhances the scene changes with his own minor key melancholies that emphasize the great acoustics of the new performance space.

Director Damaso Rodriguez has cast the play well, though the revelations at the close of the piece are somewhat confusing with a split focus that might be difficult to puzzle out at first.

DESIRE UNDER THE ELMS