A NEW NOISE AT A NOISE WITHIN PASADENA 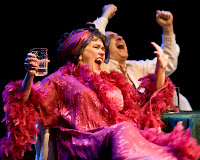 TWELFTH NIGHT.. or What you Will by William Shakespeare

Richard Boone is possibly best remembered for his TV western, Have Gun, Will Travel. It told the story of a fast gun for hire in the early American West. Later, The Richard Boone Show set out of do a somewhat radical approach to television using a company of actors in repertory, featuring Mr. Boone acting and directing in a variety of roles that stretched their artistic abilities, allowing the television audience to enjoy familiar faces in a variety of roles from week to week. It was a noble effort and as we got to know the actors, including Ford Rainey and Harry Morgan, it was a pleasure to welcome them into our homes.

It is that familiar feeling that blossoms as we settle into A Noise Within Theater’s brand new space in Pasadena. It feels right to see Geoff Elliott (ridiculously silly Malvolio), Debra Strang (apt and sexy Maria), Apollo Dukakis (bawdy and then some Sir Toby Belch) and Robertson Dean as Orsino mount this stage, in this great new venue, having such a very good time. After nineteen years at their Masonic Lodge location, it became obvious to the Elliotts and the company that Glendale was not going to make any effort to keep the company there. Fortunately, more welcoming arms were outstretched in Pasadena. Mayor Bill Bogaard welcomed attendees as an unofficial greeter as we filed into the theater. The feeling of support not only for A Noise Within, but for the spirit of Art filled the auditorium.

Before their first official performance, ANW co-founder, Julia Rodriguez-Elliott, held forth to welcome the invited audience Home to ANW and The Redmond Stage, named for Charles Redmond, VP of the Times-Mirror and chair of the ANW board for many years. She thanked the assembled supporters of more than 300 as they rose to their feet to inaugurate the space with its first standing ovation.

Having rushed from a screening of ANONYMOUS (the new Roland Emmerich film) to make the early six o’clock curtain of Twelfth Night, I had had a taste of the play presented briefly in the film: the final scene where Sebastian and Viola reunite. Director Julia Rodriguez-Elliott’s take on the show was miles from the traditional sixteenth century presentation. She sets the scene in 1950’s Cuba with colorful rhumba and mambo dancers affecting the storm that blew the twins, Sebastian (Max Rosenak) and Viola ( Angela Gulner) asunder. The strong presence of Afro-Cuban influence erupts with Anthony Mark Barrow’s interpretation of Feste, the Fool in his prologue and through the play. It’s pre-Castro with cigars and rum in abundance. Also notable are Abby Craden as Olivia, sexy in polka dots and Steve Weingartner as Antonio.

Inventive use of machetes in the opening number with un-credited choreography, probably by director Rodriguez-Elliott sets the tone for the remainder of the play: fast paced and true to the letter of the author (I still think Shakespeare wrote everything he’s been credited with!!).

Keeping the thrust stage the company used in the former space, Kurt Boetcher’s simple sets transition quickly and smoothly with a feeling that may echo presentations at The Globe itself. Dedicated to the classics, Twelfth Night is a fine choice with which to open the new theater. With the exception of a couple of unsure soldiers, the cast delivers the show beautifully to life, bringing the audience to its feet once more as a final dance number somewhat confused the curtain call.

It’s a short walk from the Gold Line Parking to the theater. Consider taking the train and tell your friends that Shakespeare (or the Earl of Oxford?) is alive and well in Pasadena. Congratulations to the Company as this new venture becomes another bright jewel in the Crown City of California.

Through December 16th, 2011 in repertory