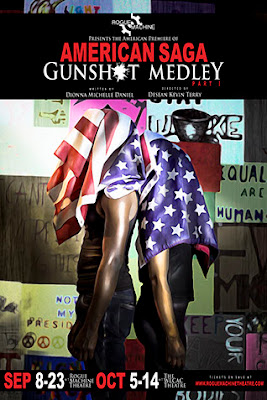 Playwright Dionna Michelle Daniel dedicates  her play to three anonymous slaves whose graves are marked only by their first names:
Betty: May 2, 1860
Alvis: April 2, 1860
George: Nov 26, 1850

Sounds of gunshots ring out with bright flashes  driving Betty to her knees only to rise up and continue to scrub the stage floor again and again.  Somehow she recovers and resumes her scullery.
Jackson's high spirited young Alvis tries and tries again to lift Betty into a happier life, but life in these times is not much fun.  Musically underscored by the beautiful High Priestess (Sha’Leah Nikole Stubblefield), she  greets the audience as we enter.

Three musicians play in silhouette, reminiscent of 19th Century profile portraits crafted by expert scissors artists: Gerald C. Rivers on bass, Ann Polednak on banjo and Crissy Joyce on violin underscore the movements of the play and of the gospels sung by the High Priestess.

Daniel's play is a strong polemic to underscore the fact that even today, prejudice and attempts by society to keep African Americans underfoot unfolds as present day martyrs appear.. Martin Luther King  and Trevon Martin .. gunned down in silhouette. It's a sad reminder of our American saga still on the road to freedom. Directed by Desean Kevin Terry, the story gives hope that we may  still maintain our goals: for all to rise equally with  mutual respect for one another in the United States of America.

From October 5, 2018
Fridays and Saturdays at 8pm
Sundays at 2pm through October 14th
Tickets and information:
Group discounts:
AmericanSagaGroupTix@gmail.com  855-585-5185
https://www.roguemachinetheatre.net