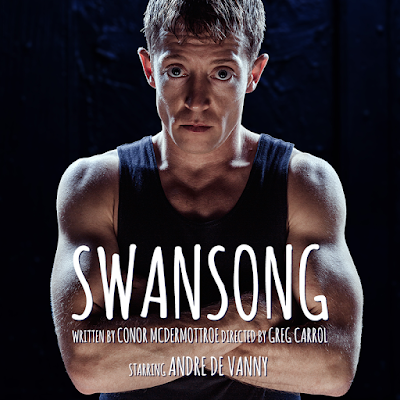 Austin "Occi" Byrne  (André de Vanny) stands before us, half in and half out, the fourth wall merely a suggestion.  He shouts for Agnes, his favorite swan.. shoos the others off with curses and begins his meandering tale of life.
A struggle.
A simple Mick, Occi's story is one of being fiercely alone ... the streets of Dublin... the make do of a guy on the fringes of society.. the fringes of sanity. The fringe...even the precipice of life.  Occi loves his Mammy but is sorely deficient in a way to help her.  A moment in McDermottroe's excellently crafted piece brings Occi through the fourth wall to a woman in the front row where gently takes her hand. The sadness and mystery of life and death through the eyes of a guy just trying to get by brings tears.
It's tough to do a fully scripted piece all on one's own. Actor Vanny, whose credits are deep and wide, with only the aid of some subtle lighting changes and director Greg Carroll's suggestions, without skipping a beat nor losing a moment... from one situation to the next brings "Occi" (ahki) to life as he glides and stumbles through finding a way to redeem himself as a human being with probably no real notion that it is his goal...  as we all strive to do our best...  to simply carry on.

Tour de force is an oft used cliche. Any time an actor becomes totally absorbed in his role, remembering the words of a playwright (unlike  self written memoirs performed by their authors) for 75 minutes...  holding his audience in thrall, that's something.  Vanny's deft physicality, choreographed almost as dance moves, brings to mind an Irish American actor who did well on stage and in the movies: James Cagney.

Produced by Australian Theatre Company, this west coast premiere is another feather in the cap of Skylight Theatre's Gary Grossman. His eye for provocative work is still as keen as ever.
Go see "Swansong."