INDECENT at The Ahmanson

Before I leap onto the growing bandwagon lauding the wonderfulness of this play, I have to take a step back in time to when the Center Theatre Group actually built The Ahmanson in about 1967. The seating capacity at the time was 1,600 seats, a relatively intimate space.  In the nineties, the space was expanded to emulate the size of a 'Broadway' house to seat 2,000 plus.  LosAngeles Times theatre critic, Dan Sullivan, noted at the time that this was probably a mistake and that dividing the space horizontally to create a smaller venue upstairs where the balcony was and to make the lower half still capable of 'Broadway' style/sized plays might have been a better idea.
Whomever makes the decisions to create spaces like The Ahmanson and The Pantages where figures on the stage become tiny little people on great big platforms must have a reason. It escapes me. What these huge venues do for playgoers is to challenge us to sit in a barn with marginal acoustics, but we may be lucky to have our opera glasses to bring the action into focus.

I favor intimate theatre. All of this to say that had Sullivan's idea been implemented, we'd still have a sixteen hundred seat space downstairs which would be adequate for an amazing show like "Indecent" and another space where more intimate shows like the upcoming Leguizamo " Latin History for Morons" might play.

My soapbox is a tiny one and I don't expect any changes in the future for Center Theatre Group to the current physical facilities which are gorgeous.  Being overwhelmed entering the Ahmanson is part of the experience of what the Arts may do for us. From Row Q, the ten actors, are all listed in the program  as "Actor" with the exception of Richard Topol, Lemml, the Stage Manager.  It's a relatively bare stage. The actors seated silently: waiting.. as the audience enters. This is an ensemble. 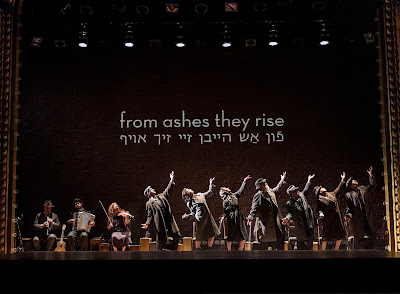 This is "Indecent" by Pulitzer Prize winnng playwright Paula Vogel; directed by Tony winner Rebecca Taichman. It dramatizes the true story of how Sholem Asch’s play, “God of Vengeance” made it to Broadway in 1923 — and the controversy that surrounded the play, which originally contained a love scene between two female characters. . .   in the rain.  We won't be disappointed.

Returning to the roots of Yiddish Theatre and Tradition now emerges in a spectacular presentation that echos appropriately during this month of our celebration of Gay Pride.

"Indecent" ushers us through the stage door and into the world of brave artists who knew that 'art changes lives.'  With only the basic introduction to the players: no character names in the program, it's difficult to credit most of these moving and protean performances by the cast of seven and three musicians.. also included in the cast.. Taichman's direction moves us gently utilizing  projected dates and locations through the history of God of Vengeance from Asch's first reading in the salon of a local producer..  His first play! through the European tour to the issues of 'indecency' that arise when hoping to move the play to Broadway. It's a long journey, including the rain scene and the joy and love that floats the story across the footlights and into our hearts.

The 'dust of Poland' literally filters to the stage as Lemml introduces the players. We are introduced to the beginnings of Asch's play and with music and dance and rain, are drawn to a story that needs telling again, both in "Indecent" and maybe with another production of "God of Vengence?"
As Yekel (wonderful Harry Groener) 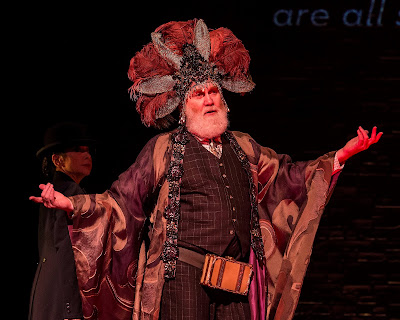 we see the beginnings of the play. He runs a brothel.  The Jews are a proud people. thus Yekel and Sarah, his wife, keep their 'respectable' lives separated from their business that functions in their basement.

Through out we see the show in stages with the actors becoming dozens of different characters all the while musicians, Matt Dariau, Patrick Farrell and Lisa Gutkin double and triple on various instruments. We dance.
Including Topol and Groener, the actors are:
Elizabeth A. Davis, Joby Earle,  Mimi Lieber, Steven Rattizzi and Adina Verson who is also credited with choreography which moves the ever changing scenes that include costume changes becoming a major part of the show.

For all my grousing about The Ahmanson, this play fills the gigantic space to the rafters. The energy of the cast sends us back to reality with a new appreciation for Tradition and the importance of Art!  Bring opera glasses and if you have any issues with hearing, free listening devices bring the story intimately to life.