Sacred Fools Theatre Company brings a brand new musical to the stage with Vanessa Clair Stewart's DEADLY.. Pulling out all the stops for their season opener, director Jaime Robledo with composer Ryan Thomas Johnson time travel us back to Chicago, 1893, the World's Fair and a chilling tale of murder! Murders, most foul. 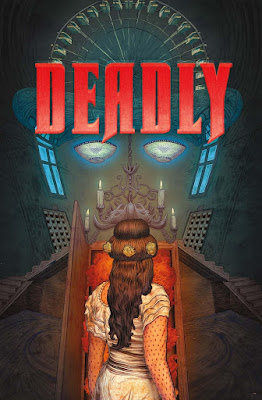 How H.H. Holmes (Oil Can Harry slick Keith Allan) lured women to his dark lair, wooed them and then with the help of his drunken lackey, Benjamin Pietzel (David LM McIntyre in for the role opening night will share the role with French Stewart) is a mystery.  Stewart's premise promotes the idea that these women were bound to be 'modern' and for one reason or another struck out on their own to wind up in Holmes's Murder Castle.

DEADLY takes us forward and backwards in time.  Initially with Holmes questioned by detective Frank Geyer (Eric Curtis Johnson) as we flash back to the episodes that found Holmes meeting and disposing of what may have been as many as twenty two victims.

As each of the hapless women (Brittney S. Wheeler as Lizzie Sommers,  Kristyn Evelyn as Evelyn Stewart, Erica Hanrahan-Ball as Julia Conner, Ashley Diane as Pearl Conner, Rebecca Larsen as Anna Williams, cj Merriman as Emaline Cigrand and Samantha Barrios as Minnie Williams) is encountered we see Holmes work his smarmy spell and one by one they die. Horribly.
Based on a true story, Stewart's script calls for tightening and some basic help with movement. Ryan Thomas Johnson's songs are all presentational and  confront the audience almost angrily in no uncertain terms. Where the show could make up time would be for Stephen Gifford's multi-tasking scaffolding that comprises the entirety of Holmes's Hotel to be more a moving part of the story.  The stop and go aspect with actors mostly providing the task of stage hands, distracts rather than adds to the dramatic structure of the play.

Make no mistake, this cast is professional to a person. They present well delineated characters who are believable in the Gothic context of the script.  High drama calls for broad acting and the acting, the presentation and the characters all meld beautifully.  The songs, however, no matter how enthusiastically presented.. and they are sung with conviction.. are difficult to understand. The parsing and meter of the lyrics is sticky at best. The tune that rings most true is the anthem sung by all the women, "Murder Castle!" Corwin Evans's projections work beautifully throughout, adding color and spice.

In all, this massive effort is overly long and even with Linda Muggeridge's terrific costumes (the women appear initially in Victorian drag when alive and then in wonderful raggedy scraps of ghostly fabric as they greet one another to haunt the 'castle' after their unhappy demise) the show needs work.

The opening night audience was enthrall with the two act drama. The cast took extended bows, not all together undeserved, as the effort and the excitement of presenting a World Premiere must be very heady.

This DEADLY effort deserves applause.  The show with a strong director's hand, may pick up the pace to bring it along to a well honed production.