Since moving to the Electric Lodge in Venice, The Rogue Machine Theatre maintains a wonderfully creative space that flexes every which way to accommodate their vast imagination.  The last three small theatre productions I've seen  including this one are filled with Sex!  Exotic sex, carnal sex and romantic loving sex are all presented with great skill.  Is it the season? 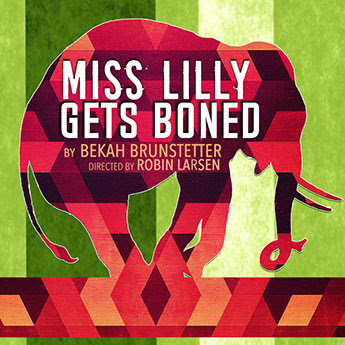 The story of Miss Lilly (the excellent Larisa Oleynik), a virginal thirty five year old Sunday School teacher whose take on Bible stories, though slightly skewed, make a point.
It takes a while for Bekah Brunstetter's play to come around. Eventually we meet Miss Lilly's loose and leggy sister, naugty Lara (Tasha Ames)  in a confrontation where heretofore chaste and patient  Lilly, whose faith is unshakable, literally prays for the next step in her questo to be sexually fulfilled. She is ready! Very!

The struggle between her imagined ideal man (he must have an accent and kiss her on the neck) and where it leads her,  poses the question, "Are prayers really answered?" Can one actually get a 'sign' from above?  Well, yes, they are.. In a way. And, Yes! Be careful what you pray for! He appears: Richard, with an accent played by Nick Lee. Brady Amaya plays Jordan, Richard's son.

Previously, there has been a murder in Nairobi.  Kavi Ladnier (Vandala Shalla) an animal behaviorist, conducts interviews with the accused murderer, Harold, convinced that she might be able to save his life. Harold is an African elephant! Time loops and the story comes back to America, with issues of grief, seduction, commitment and what lies ahead. In the over all scope of the Universe, what does lie ahead? Does mankind have an actual future?

In a similar way to Brunstetter's play, The Cake, we are up against  authenticity, dealing with deep personal beliefs, ethics and being challenged to be true to one's self.  Will Miss Lilly be fulfilled?

The startling effect of seeing a beautifully constructed Bull Elephant (created by Sean Cawelti) who evolves into a sentient being, remorseful for his crime works. In an interesting performance Justice Quinn becomes the voice and persona of the elephant.
The unusual effects of answered prayers and the production's final moments coalesce to fulfill what may be prophesies of Biblical proportions.

Robin Larsen's finely tuned direction and an excellent cast mesmerizes the audience as we eventually put the whole scenario together.  Tragic and funny; poignant and sad, it's well paced and revelatory.  This is a must see for audiences who long for a spiritual and intellectual  challenge.