Rider Strong's fictional approach to factual events becomes his world premiere play, Never Ever Land.  It discusses the issues of one of the most famous pop stars of the 20th Century and the stories we have all heard whispered in private or shouted in the press.  Strong, a child star with the television show Boy Meets World in the 1990s now arrives with a chilling story of celebrity and where it may take unsuspecting folks who are drawn into the magic circle.

It's not entirely clear where 'myth and substance' may meld, but the goal, according to the author is to commingle them in such a way as to send a message to us all that when it comes to fame and greed and the seduction that they may bring, it's a red flag that must be heeded.  It's about seduction and Michael Jackson: The White Whale in tabloid parlance. 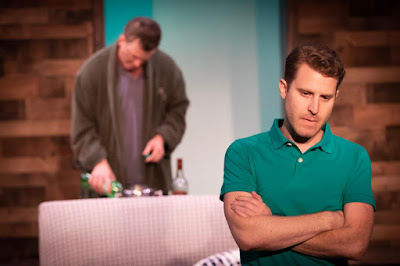 Though The White Whale is never mentioned by name, it's clear that the accusations by some families regarding time that their young boys spent with MJ at Neverland or elsewhere were never confirmed in court. Did Jacob Gable lie and  did his family come into millions for silence?

To be literally vibrated into submission by Michael Teoli's incessant throbbing bass, heard and literally felt through the walls of the theatre on Western, was the first indication that this was not going to be easy.  How the cast will ever recover their hearing from the blasting music may become an issue later in life.. The play, of course, starts the minute one walks in off the street.   We are in audience mode and the audience for last night's performance seemed to bear up bravely.  Nicholas Acciani's Greek revival set transforms with the entire cast serving as stagehands, during punishing sound that accompanies harsh informational videos projected on the upstage wall.  Two young boys Tim and Jacob Gable (Marcello Silva and Orlando Christian)  are pressed into service as well.

I have a bit of trouble with children on stage.  There is, to a person, a certain tone of inexperience that makes a kid difficult to believe.  It may be as simple as just major 'indicating' (and that should be fixed by the director, but Michael A. Sheppherd either encouraged it or the kids just went for it on their own).  Perhaps it seemed necessary to have the kids played by actual children, but in a recent production at The Rogue Machine Theatre, children were played by adult actors and it worked just fine.  Again, casting is on the director and the goal must have been to slap us silly back and forth in time when the kids were kids and then meeting them as adults.

The adults playing Tim and Jacob Gable (Andrew Brian Carter and Wade E. Wilson) were under the influence, perhaps, of the demanding original music, that rocked the theatre when we were transported from 2012 to 1993 and other times back and forth, slip sliding in time as adult Tim weasels his way into an echo of  a sleazy TMZ gossip type show with Leif Vantvoort  as bombastic Vincent Hack.. the "Lawyer" who thrives on the slimy crap that ruins lives and makes him lots of money.

The White Whale died June 25, 2009.  His legacy of transcendent music and unique style influenced a generation.  His interest in childhood and children as friends is speculated upon by Strong... as Jackson's loss of his actual childhood as the driving force in the Jackson Five may have been motive for him to regain some of his youth as an adult, as if we could ever call him an adult?   What ever actually  happened remains speculation and innuendo.  The millions paid in hush money come into play in this production with Jacob being urged, twenty years later, to "tell the truth," which may boost his half brother, Tim, into the limelight and make him rich.

Plots and subplots being whipped back and forth in time from the 1990s to the 2012s or so, annotated by blaring music and over amped video projections is not all that difficult to follow, but the direction of BIGGER, FASTER, LOUDER, ANGRIER.. is not necessarily "Better." In fact, these poor actors, pressed to the limit, make their acting technique overly obvious to the determent of their characters.

An odd subplot involving Jacob's fascination with the 18th Century poet/plagerist Thomas Chatterton brings the brothers to an understanding, at long last.

A World Premiere is exciting. This one, perhaps with a respect for the hearing health of the cast and the audience with maybe a more realistic presentation of the material, as salacious as it might be, could be an idea for a slightly more subtle approach to an extremely rough subject.
One fact check:  The Balloon Boy Hoax was not in Texas. It happened in Colorado.