BELOVED at the Road / Magnolia

"Every shopping mall in this city -- in the world -- is a horse and buggy rolling in the wrong direction on a super highway. It’s only a matter of time before suburban retail dies out altogether." Dorothy. 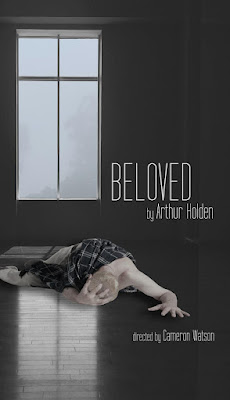 A 'World Premiere" is a pretty exciting thing for me. To see work that will, no doubt, find it's way, maybe even to Broadway, is a treat.  Cameron Watson's direction and staging seemed, at times, to not favor the actors, but all in all, that said, the difficult text and the brilliant turns by three actors in five parts works nicely on the multipurpose set at The Road on Magnolia.

Road founders Sam Anderson and Taylor Gilbert as Stephen and Dorothy present parents past traditional parentng prime.  After twenty years of trying and then, in their forties? Pow.. Bun in the oven.  Dorothy's recounting Stephen's reaction to her pregnancy is a dear and defining moment.

Three disparate episodes of Arthur Holden's unusual episodic play present  a story of conflict and anticipation. It bubbles with angst. In part this is because the human element of a family mired in 'change' has consequences beyond the business of Business.  The family's business needs attention and the goal: resolution?  redemption? is a difficult quest.

It is impossible to not take sides as Stephen, David's father   and his mother,  Dorothy wait. And,wait  ..  This stew and stewing is made up of twentyfirst century issues with a smattering .. or more than a dollup of Edward Albee as these slightly 'older' parents of their troubled teen age son field dark issues in his life. And then? Then, to, the issue of  the married real estate business partners' failings.  The dialogue crackles. Something, bit by bit is about to hit the fan.

For the playwright to rely on only one actor to fill the roles of three important characters is an interesting proposition.

The excellent Cherish Monique Duke becomes the mordant that holds the play together. She first brings a mousy parochial school counselor, Sylvia Mendes, beautifully to life. Then she finds her way to becoming a hip psychiatrist, Miriam Jacobs... And THEN.. crashes into a prosecuting attorney's formal gown as Marika Stavridis (It's Canada, okay?). Duke manages to whip out the word "asshole" with style and grace more times than I could count.

Brian Graves's simple setting is amplified by Nicholas Santiago's terrific video projections. Lights by Derrick McDaniel. The use of huge set pieces that work for other productions at The Road focuses our attention literally, on the argument of the piece. Too much information would spoil the play, but suffice it to say that when The Road opts to 'go for it' with strong professionals, the result is a short (100 minutes) presentation that has moments of tough humor and some deep emotions that transcend to the heart.

Playwright Holden leaves us much to ponder on our own.  The plot twists work and the ultimate question: resolution? and/or redemption?  must be left to us.

The Road on Magnolia