Gone are the days

when my heart was young and gay
Gone are my friends from the cotton fields away
Gone from the earth to a better land I know
I hear their gentle voices calling "Old Black Joe." 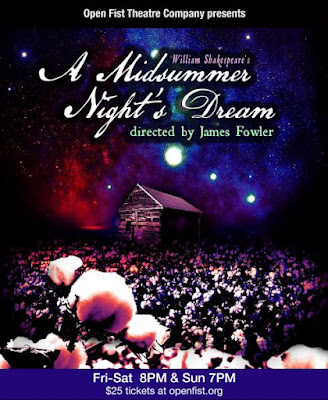 William Shakespeare wrote "A Midsummer Night's Dream" in 1595 or 1596.. I had to look it up. It's filled with royalty, misplaced love, the Rustics, Puck and Fairy Magic.  Director James Fowler has set the play not in Athens, Greece, but Athens, Georgia in the Antebellum South.  It's summertime:  The livin' ain't so easy but the cotton is high.  A sharp disconcerting  crack of a whip is heard off stage. Crack!

Jan Munroe's set shines with a beautiful back drop by scenic artist Stephanie Crothers. A traditioal old plantation is the setting for our connection to the issue of Egeus (Alexander Wells) lookin' for support from Big Daddy Theseus (Bryan Bertone),   insistin' that his daughter, Hermia (Sandra Kate Burck), wed Demetrius (definitely Devon Armstrong). Of course she's nuts about Lysander (Dylan Wittrock).  If you can tell Lysander apart from Demetrius  you are ahead of the game.  On the other hand, diminutive and feisty Hermia is a ball of ginger fire and Helena (Ann Marie Wilding), the taller gal, is no pushover.

*Note.. The confusion on who's who in the Lovers  Department is on me.  None the less, see this show and parse out the cast as best you can! This is a plea for in hand programs where photos and names can be compared and though it's no help to me.. now..  See this show.

At rise, Fowler sets the tone with a fully staged sort of cotillion: the Fairies and the Mechanicals all played (with one exception) by Black Folks and the White Slave Owner Ruling Class on board with heavy southern accents. After that shock either wears off...  or sinks in, the text of the play and the intentions of the characters settle with some margin of comfort.   Shakespeare's familiar lines are welcome, even with a southern drawl, y'all.

The fun of this play has been that once the fairies climb on board and the lovers are doped up in the Forest (&Titania, too!); Puck (doubling as Philostrate, the excellent  Monazia Smith) stirs the pot. The Rustics double as Fairies, which is okay. Bottom (Michael A. Shepperd having way too much fun!) bombasts his way into the middle of the mechanicals led by Peter Quince (Debba Rofheart). She struggles a bit to match the loud and enthusiastic presentational energy of the other players.

Having seen this play many times over the years: one show set in Colonial India! with British Royalty & Hindu Gods..    and the 1974 Peter Brook production at the Ahmanson with the Royal Shakespeare Company, The Open Fist's entry stands up very well.  Make no mistake, the physical business, especially the Lovers' Battle, is beautifully choreographed. This production is a tribute to the universality of what a good show is all about. With a twist.

(I have just learned that Peter Brook has died at the age of 97. His notion of The Open Space is revolutionary. Flights of Angels..)

I still have trouble with who's who when it comes to the lovers and their mix and match affairs. So? the Helena/Lysander/Hermia/Demetrius trip  works anyway. A friend said that the Lovers are confused, so it's okay for me to be confused, too. It all works out in the end.

Fowler has an agenda. We are confronted with his notion that Shakespeare's idea of a playful Midsummer Romp is secondary to our setting:  the South, and how Negro Slaves were mistreated and unappreciated adjuncts, though  central to the economy but plagued by prejudicial biases of those dark times.

Fowler's production is vibrant and alive with stand out performances and a polemic that I, as a white guy, am still pondering.  For those who love theatre and highly theatrical productions, this show is a must see. I recommend it for all of the reasons we love to be challenged by new works. Indeed, this presentation may be within the realm of what New Theatre is supposed to be and to do.  I am not so sure that The Bard would find all of his play  appealing.  But, the show is undeniably thought provoking.  The not so subtle foreshadowing of the conclusion and Puck's familiar departing speech is worthy of a serious discussion.

It's a gorgeous production.  I have questions that I'd like answers to and may come back to later.  Fowler has created a version of A Midsummer Night's Dream that is extraordinary.

And.. maybe?   Even important.

In order to spell the actors and crew's names correctly, I'm going to just copy and paste  the  information from the digital program.

OTHER:
• Check website for current Covid-19 protocols on the date of each performance.
• Appropriate for ages 10+