IF I FORGET Fountain Theatre

Welcome to the Casa Costanza! 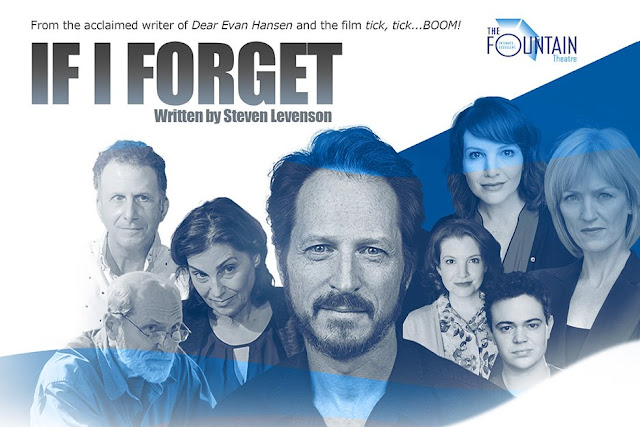 Jason Alexander admits that he did not know about The Fountain Theatre until recently. That the Fountain and Mr. Alexander, an icon from that  Classic TV Sitcom, have found one another is a blessing.

Alexander directs Steven Levenson's "If I Forget", painting an age old story with nods nuanced sometimes in muted colors and sometimes in tough contrasts of black and white.  My "Costanza" reference refers to a lot of yelling.

It's fast. And, loud.And, the audience laughed: a lot!

Make no mistake. The family interplay, which may actually be over the top in Jewish families, starts out at nine and quickly escalates to ten.

The cast of eight actors is excellent with one amazing exception. Whatever is the next up from excellent is delivered by Caribay Franke as Abby.

Abby, the daughter of Michael and Ellen(Leo Marks & Síle Bermingham), Alexander's brilliant device to have Abby physically appear in dramatic and truly luminous dance moves throughout the show with interstitial interpretations of her character becomes the mordant: ingeniously binding the chapters of the story together. Hers are thrilling bits of business that elevate the piece as a whole beyond what may have been Levenson's original intent.

Franke is a revelation.

It's the first year of the new millennium and Michael and his wife, Ellen, have now to deal with teen daughter, Abby, who is making "personal discoveries" on a student group trip to Jerusalem. Michael fears for her safety and rightly so.

Difficult family decisions are brought to the table with increasing degrees of difficulty, all of which turn .. pretty much.. on what to do about Dad? Lou Fischer (Matt Gottlieb) is the aging patriarch of the Fischer mishpaca (I had to look that up). His three children, Michael, Holly (Valerie Perri) & Sharon (Samantha Klein), factor into the burgeoning family challenge, exacerbated by the issues in each of their personal lives and connection to the family store.  Politics and the times weigh  heavily on everyone's shoulders.

Michael, having been a professor at his university for some time, is now scheduled for tenure. Yes, kind of a big deal because he and Ellen have opted to buy a home!  Michael is a scholarly author, his third book now in galleys,  apparently appears to instruct American Jews to reconsider the Holocaust!  The book has become an albatross around his neck as issues with daughter Abby erupt and his father goes into decline. Michael's younger sister Sharon and older sister, Holly, square off as family matters escalate... and, escalate!  as things change for the aging Lou.

The tiny indoor space at The Fountain challenges not only the audience, elbow to elbow, but for scenic designer Sarah Krainin, the play calls for several different locales. The cast facilitates the scene changes smoothly and artfully with Abby adding texture to each scene change.

Taking a note from Brecht, Alexander plants his actors not participating in any current scene, off in the shadows but still on the stage. For me, a distraction.

Holly and her husband, Walter (Jerry Weil), are wealthy. He's an attorney and stepfather to Joey (the excellent Jacob Zelonky).   Holly, a wannabe interior designer, must deal with an absent daughter and  her grunge /  thug son, Joey. Surprisingly, Joey reveals himself to be, perhaps...  the sweetest of the lot in the face of the family's incalculable issues.

A downstage red light, blinking in Morse Code,"Please Fix Me" and another lighting issue were minor distractions.

As a side bar,  I need to say that my 'reviews' are not intended to be simply discussions of the show I've been invited to review.  My reviews attempt to reflect my entire  experience of being at the theatre and how not only does the play work (or not) for me, but how I may have come away affected by the experience.  It's a vanity trip that I hope informs the reader.  And, maybe, even...  the producers of the play.

I highly recommend this "If I Forget" and hope that this brilliant presentation warms itself to a well polished glow.

House Manager: not listed. I told him I'd mention him.  Hello.

If I Forget by Steven Levenson

Secure, on-site parking is available for $5