archy & mehitabel at the whitefire 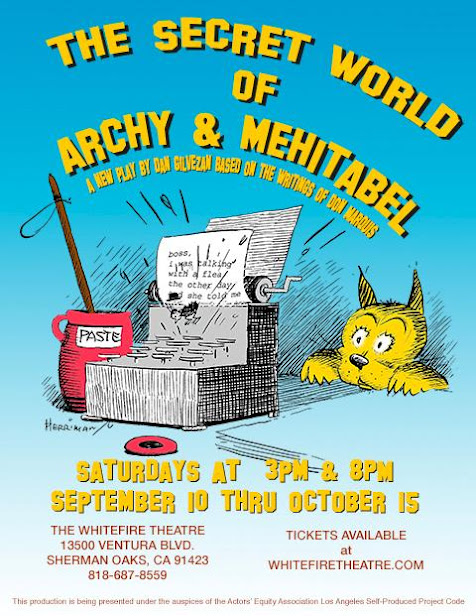 who'd a thunk that an old timey newspaper column might be fodder for a far out play with two humans (bill chott) The Boss and perfect atmosphere on the on stage piano dan west.  well, dan gilvezan for one.

full disclosure, i met this guy years ago and to see that he's active and  has chosen a pretty obscure pair of critters for a theatre piece is . well.. admirable.

don marquis's columns featuring archy (gilvezan) the typing cockroach and his pal, mehitabel, the cat, (gorgeous and fully feline: carolyn hennesy) in the "sun dial"column of the new york evening sun a hundred or so years ago rang a bell with me.  Don Marquis wrote the articles. he's the guy archy calls "the boss". archy's pithy insights and director moosie drier's smooth direction lends itself to this engaging and really funny presentational approach to sharing these odd  anecdotes. It is at once charming and philosophical melding with the metaphysical and spiritual.

i am a fan of typing which drew me to this project in the first place.  with apologies to e.e. cummings, this review is typed ala, archy.

"discovered" by Marquis in about 1916  archy is, in fact, a reincarnated poet (no relationship to gregor samsa.)

archy's inability to press the shift key down, also a failing of mine now and then, this delightful romp hits the whitefire stage in such a way as to engage and entertain. Gilvezan's casual approach as the author and the the somewhat cocky critter are undeniably spot on.

for what it's worth? don marquis ('markwis')had a battleship named for him & he was really prolific.

what makes this "audience in person" production truly deserve a rave? it's a combination of a well constructed script;  tight direction and absolutely fully committed actors. toss in an opening night audience ready for a love fest and the energy in the room is palpable.

we meet the boss,

a ringer for a younger wallace shawn (bill chott) who tells the story of discovering the philosophy of a now dearly departed poet, who has left him messages by hopping on the keys of his big old remington. the audience is sworn to secrecy. I did not raise my hand!

the show moves a pace with adorably delicious Kelly Stables as a rat, a mayfly, a moth and a flea with a major attitude.

equally versatile with a coterie of critters to play is richard horvitz who almost stops the show as the old cockroach minutes after the curtain goes up.

what Gilvezan and company have done is to reveal the culture and politics of the days of woodrow wilson to announce the death of planet earth...  yet, there's still a glimmer of hope as the notion of reincarnation up or down the 'ladder of importance' lies beneath the basic message.

"the secret world of archy and mehitabel" is an unmitigated hit that can only blossom as the run continues.

playing only on saturdays: matinees and evenings, this cast has a message that is dripping with love and lots of fun..

find your way to this stretch of ventura boulevard. find parking! find food! and please pass it on that for a good time sign up to get to know a bug and a cat and their amazing pals.


the secret life of archy and mehitabel (a world premiere)

saturdays only at  8pm