"EVERYBODY"
Branden Jacobs-Jenkins reaches six hundred years back in Time to mine the 15th Century Morality Play "Everyman".  It's hip and pithy.
Cherish Monique Duke ushers us to our seats.
A scary prat fall in Row B sets a tone.
All the rules and what to expect are a litany of safety.
The actors each cast a colored ball into a Bingo Bird Cage to assign them which role they will play tonight.

Anne Gee Byrd is out of the lottery as she limns only Death.. All men fear her!  Later comes Love (Alberto Isaac)  more about  him later.  A mystery character: The Little Girl is played by  Dawn Didawick who doubles as Time.
The challenge of learning the entire play for all of the Somebodys is a great acting exercise. Anteaus is up for the game!   It’s an actingTour de Force. 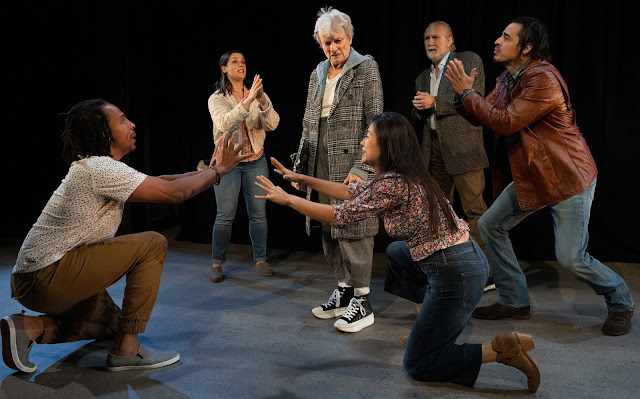 What Jacobs-Jenkins seems to have in mind, ultimately, is that folks need to lighten up and get down with kindness.
God has tasked Death to grab Somebody and bring them to judgement.  Everybody (Nicole Erb for tonight) is recruited by Death to show up before God and own up with an accounting for her life on Earth.  Everybody asks for permission to bring a friend Death says okay.. and Everybody heads out to find a pal and meet her fate,
First she encounters  Friendship (Lisa Sanaye Dring) who is willing to march into Hell.. as long as she can make a return trip.. A lip sync 'device' here is really just for show, but pretty cool. Alas, Friendship exits down left.
Doing her best to find a traveling companion, Somebody greets Kinship   and Stuff (Harry Groener in a broad turn) and others... all of whom decline a trip to the Great Beyond.
Spoiler Alert.  Something happens in the audience. The lady who took a header is okay, thank goodness.. but the show is interrupted and the playwright goes into an exhausting .. literally exhausting.. lesson. Ms Erb as Everybody, is  Humiliated and then Coached by Love ( Alberto Isaac),  collapsing after running nd chanting  "The Body is Just Meat!" (Alan Watts says we are just 'tubes' but basically, the same idea.)

Everybody surrenders!
Everybody has reached out to others along with Friendship:   Strength, Kinship, Beauty, Cousin,  Mind, Stuff and Senses. As it was in the 1400s, poor Everybody is striking out.  Eventually, Love abides.
Suffice it to say that this is a fantastic bit of Theatre that challenges the audience to keep up and in the end come together.  The plea to just be kind is shared by Usher in her epilogue to wrap things up. She is sincere and direct. We can't go back and fix things after death, so.. it might just be time to take stock. There's some stuff that I don't understand: La Danse Macabre that's well choreographed, perhaps the Mouth of Oblivion? Black light skeleton suits are cool..
Suffice it to say that this is a huge acting exercise that deserves to be experienced.  From my early Humanties or maybe English class, the story of Everyman seems spot on.  Jacobs-Jenkins has made everyone hip and the random selection of who plays whom each performance is really very impressive.
There will be questions about 'what's next' that the playwright wants us to explore.

Formatting on this page went wonky on me.
Apologies if it runs off the page. 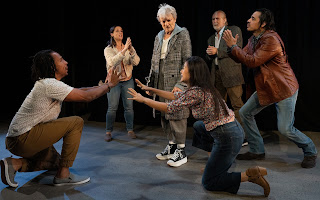