A COMEDY OF ERRORS!! 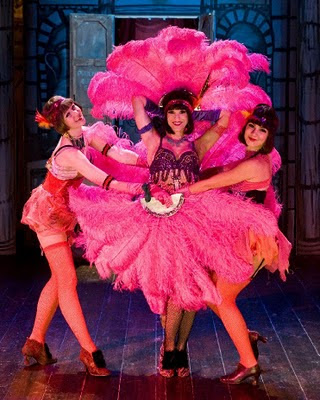 (l-r) Gwenmarie White (Ensemble), Lauren Robyn (Courtesan), Christine Breihan (Ensemble) Photo Credit: Craig Schwartz
Madcap!!!
That’s what my friend, Jeannie, called it: William Shakespeare’s A Comedy of Errors now playing at A Noise Within. It’s always nice to have company when reviewing a show. Of course, I’d have said zany or outta sight or whacko… and eventually “madcap” would probably have popped up. Heck, it doesn’t take PhD to grab the ideal word right out of the air and have it fit just perfectly. But “Madcap” is just about perfect!

“Burlesque on Brand,” the ANW tribute to Shakespeare’s nutty comedy of mistaken identity, may be a sly tip of the hat to what the City of Glendale is really interested in: The nearby Americana’s glitzy faux-Disney kitch. After a short honky tonk piano serenade by David Bickford on the upright, who also provides sound effects (the “chain” being the most fun!) we literally meet the cast. Director Michael Michetti’s wonderfully mounted burlesque (the show is presented as a play within a play), introduces the actors individually as members of the Burley Q: the cast of the play. Ostrich plume fans deftly wielded by chorine cuties set the scene. Angela Balogh Calin’s costumes rock.

Reading the synopsis of A Comedy of Errors will do its best to just confuse. So, the thing to do is to simply follow the silly romp and once you ‘get it’ that the twins Antipholus of Syracuse and Antipholus of Ephesus, both and each played effectively by Bruce Turk (sons of Egeon, the well seasoned Michael Stone Forrest) are twins separated shortly after birth as explained in a terrific silent movie. The slaves: Dromio of Syracuse and Dromio of Ephesus are both played by Jerry Kernion, who, for a big guy takes some major pratfalls and takes them beautifully. Egeon, the Antipholuses delinquent father, is sentenced to death by the Duke (Ever eloquent Mr. William Dennis Hunt founder of The Company Theatre of Los Angeles) for crossing the border into Ephesus illegally! Evidently, they were tougher on immigration than even the folks in Arizona are today! Egeon narrates the silent film that explains his journey and desire to find his long lost twins. He has only hours to prove himself to the Duke. The hours are marked on set designer Kurt Boetcher’s cheesey clock that hangs over the doorway of the home of Adriana and Antipholus of Ephesus. A Laugh In window above opens for some additional fun.

You can’t tell the players without a program and even then, you may find yourself referring back time after time to try to figure out who’s who. It really doesn’t matter though because the slapstick routines and The Bard’s couplets (along with a few contemporary references tossed in for good measure) round out the fast paced show. Vampy Adriana (gorgeous Abby Craden), married to the successful Antipholus of Ephesus is jealous and suspicious (rightly so!) of her spouse. Equally beautiful Luciana (Annie Abrams) plays her sister who is vamped by the other Antipholus (her brother-in-law’s twin!) After a dozen mix ups, each one funnier than the last including some missing money, a rope and a golden chain (bling!), the boys of Ephesus are given sanctuary in the Abby of Syracuse and guarded by angelic nuns (made up of some of the ensemble: Andy Stokan, Christine Breihan, Douglas Rory Milliron, Gwenmarie White and Sara-Lucy Hill?). About the middle of the first act I lost track of a couple of the characters. The actors are all are notable and mentioning the great ensemble work of the entire cast is a must. Paul D. Masterson as Balthasar and the 2nd Merchant.. (was he the ventriloquist?); P.J. Ochlan as Angelo/Doctor Pinch; Rene Ruiz as First Merchant and Lauren Robyn doing her best Judy Holliday impression as the Courtesan are all so much fun.

The Duke orders that the Abbess be summoned and the cry “Heyyyyy Abbessssss!” time travels a couple of decades from the twenties to the forties and briefly stops the show with the Abbott and Costello reference. Dragalicious Gibby Brand plays The Abbess as well as the randy Nell whose cap is set for one of the Dromios (oh wherefore art thou, Dromio?)

The eventual problem, of course, is how to present the final scene to reunite the twins of Syracuse and the twins of Ephesus all at the same time. Needless to say that in ANW’s Burlesque on Brand, this is not a problem. Twins are reunited, families reconciled and all’s well that ends well. Applause!

A Noise Within takes the company off to Pasadena in the fall of 2011 (they are still about a million bucks shy of their entire budget, but ground is broken and construction has begun.) A fund raising campaign is on to sign folks up for the “50/50 Coffee Club” ($50 a month for 50 months which will fulfill a matching donation) which will garner each donor free coffee at the theater for life! Coffee anyone?