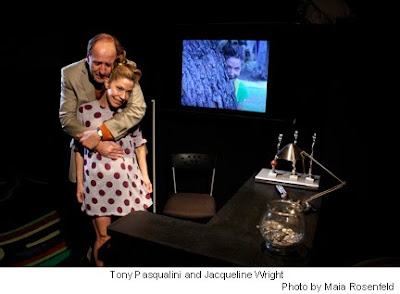 It’s a fine line between what could almost be a simple narrative and the psychedelic trip currently on hand at the Atwater Village Theatre. House of Gold, playwright Gregory Moss’s surrealistic examination of the odd world of the Ramsey family of Boulder, Colorado may be searching for answers or, perhaps, the play is like a Magritte painting, leaving discovery to the beholder. The ‘fine line’ becomes a tightrope for Jacqueline Wright as JonBenet upon which to balance. For an adult to play a child is a challenge because the line between ‘playing at’ and becoming the character fluxuates unless there is a believable commitment to finding the truth of the child. This holds true for Wright as well as Alex Davis as Jasper, JonBenet’s put upon childhood pal (or is he her brother?) Their performances are mostly consistent as the story unfolds. However, accepting adults in the role of children is a stretch. Of course, what the Ramseys did to JonBenet was to manipulate her into the role of an adult, probably to allow the mother, (an excellent Denise Crosby as Woman), to live vicariously through her pretty little six year old daughter.

The opening scene exposes the strained relationship between the Woman and the Man (Tony Pasqualini)/the Father as she serves up sausages made from JonBenet. Director Gates McFadden (artistic director of Ensemble Theatre/LA) has woven together the disparate aspects of this odd piece nicely. Notwithstanding the disjointed and highly physical interstitials of the four buff Apollonian Boys (Chris Arvan, Josh Heine, Matt Little and Eric Schulman) who gang up to plague Jasper, the dreamlike quality of the piece is augmented by a very innovative use of ET/LA’s basic black box. With the audience seated at just the north and west walls of the space, the scenes change seamlessly. Kurt Boetcher’s bare bones set featuring rolling screens and set pieces provide for innovative videos by Alexander Mirecki throughout the play. Like the play itself, the set, populated with impressive video screens and psychedelic artwork covering the floor are augmented by William H. Parks’ projections and Drew Christie’s animations.

Any surrealist work of art is open for interpretation. Certainly, House of Gold is deliberately thought provoking in this regard. In the fifteen years since the tragic death of JonBenet, no one has been brought to trial for her murder. The introduction of a very creepy guy, Joe (Graham Sibley), (who may echo Jasper as an adult?) may be a suspect, but clearly, the real culprit in the sad demise of JonBenet’s spirit is The Woman who browbeats the little girl into submission to present herself as a sexy six year old.

A disparate detour from the story (perhaps a nod to Arthur Kopit?) involves JonBenet’s visit to Grandpop (Melvin Weiss) who seems to be stored in the attic. He may be her refuge or even a fantasy in the midst of her father’s advances and her mother’s manic goal of making her daughter a beauty queen. Keith Arthur Bolden rounds out the cast as the detective and the coroner.

The beauty of McFadden’s and her professional crew’s efforts for this production and the other shows I’ve seen at the Atwater Village Theatre is that they spend the energy and truly invest talent and cash to commit fully to the edgy and innovative productions they opt to mount. This is disturbing material and though not always clear as to the argument of the story, the actors and the tech work beautifully together to fulfill the director’s vision.

House of Gold by Gregory Moss