PEACE IN OUR TIME / ANTEAUS 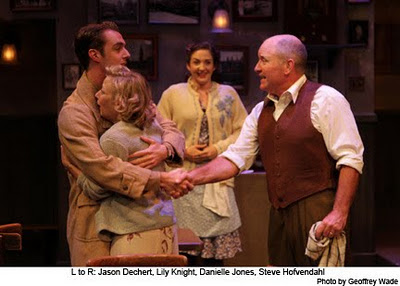 PEACE IN OUR TIME / ANTEAUS

Anteaus’s current offering adapted by Barry Creyton from Noel Coward’s somewhat obscure drama is directed smoothly by Casey Stangl. Curtain speech by the co-directors of Anteaus mention that it is the goal of the company to not only present important and classical theatre, but to create a space for the next generation of classically trained actors for the American Stage. A noble calling, indeed. The professional presentation runs for more than two hours with an intermission.

Stangl keeps the story moving apace as it examines what life in London might have been like had the Nazis invaded and held the city during WWII. Interesting video montages separate the scenes with stock footage manipulated to show Trafalger Square and Nelson’s Column surrounded by legions of German troops with the King and Queen on hand.

There is a contract that, though unwritten, between any theatrical presentation and its audience that relies on the abandonment of disbelief ; allowing the work of the play to become more a reality than simply an evening’s entertainment. I must admit that I have a prejudice in this regard and though Anteaus productions adhere closely to maintaining the reality of their shows, in this one, the first appearance of one of those phony plastic cigarettes, frankly, bounced me wholly out of the play. Certainly, the folks in London in the forties and around the world used tobacco all the time. It may be important to the argument of the script, but, to me, it was just silly. A London pub not filled with smoke was okay, but to fake the tobacco did not make sense to me.

It’s hard to get back to the contract when the agreement is broken. The second breech of contract comes with the brilliant video montages that separate the scenes and announce the passage of time. John Apicella’s projections would have worked beautifully, had it not been for the literal explosion of over amped sound effects that accompany the images. At least one other patron literally pressed her fingers into her ears to shut out the abusive volume. Theatre of Cruelty may be okay for Artaud and in other circumstances, totally called for. However, this story, though filled with palpable tension and effective brutality, is not served by the assault that the opening night audience was subjected to.

Stangl’s ability to hone his cast to a single unit, especially as he is directing essentially two separate shows is professional. The choice to insert some of Coward’s music accompanied by Richard Levinson’s live piano in the pub is an effective one. There are stand outs in the company. Steve Hofvendahl as the pub owner, Fred Shattock, holds the cast together beautifully. Because the cast is huge and references to the character names come infrequently, a strong nod to the raven haired chanteuse is in order as well as to Shattock’s wife, Nora, played by Lily Knight. This is an ensemble piece and notwithstanding the blatant distractions noted above, if one is a fan of Antaeus and owns earplugs, it may be worth a trip to NoHo for the show. It’s a long one. The British accents are acceptable to each Brit. Not so much for the Germans and one Austrian.

Peace in Our Time by Noel Coward