FANTASTIC at The Boston Court

In their program notes, Boston Court Artistic Directors Michael Michetti (who directs this play) and Jessica Kubzansky remind the audience that The Boston Court is not your average theatre company.  They pride themselves on taking chances. They are warm and welcoming in their curtain speech and invite the audience not to sit back and relax, but to “come to the edge of your seat, lean in and enjoy…”   The man sitting next to me did just that through the entire show.

Commissioned by the Cleveland Public Theatre, this is the second production of Eric Coble’s play, My Barking Dog. It’s allegorical and literal and silly and after a pokey start in the dark we witness not only character arcs that build to a totally unexpected fantasmagorical climax but virtually experience the characters metamorphoses as they evolve.

Unemployed Toby (Ed F. Martin) stands on Tom Buderwitz’s stark multifunctional, essentially bare stage and decries his loneliness of fourteen years, never been kissed for seventeen, and his being unemployed for months.  He mimes his attempts on a laptop to get free WiFi from a neighbor, making excuses as to why he can’t just hit a Starbucks to do his job search.  His take on life has declined to every day becoming a Sunday: a day that he describes as God’s Joke Day of Existential Angst as it is the day most people are dreading their return to work. Being out of a job, he experiences that angst every single day. 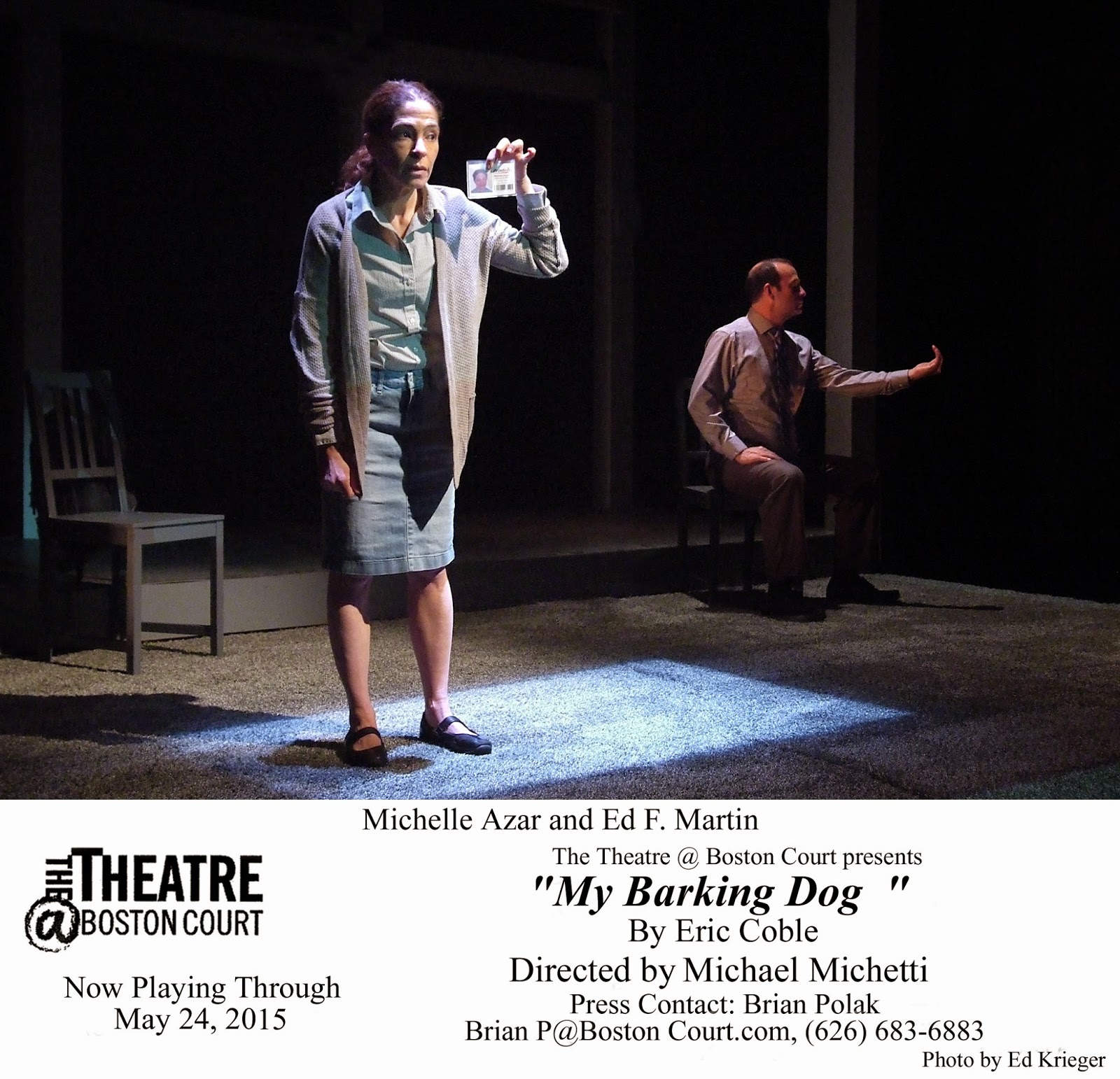 Contrapuntally, we meet Melinda (protean and mercurial Michelle Azar) who works nights in a printing plant.  Dowdy and shy, she enjoys not working with people.  She points out that in fourteen years she has not changed from her original ID badge photo, proudly showing the audience.  We discover in time as both characters directly address the audience that they live in the same apartment building.  They live in the City.  It’s a Big City.  Melinda returns from work in the middle of the night and Toby can’t sleep and so, both up in the wee small hours they concurrently see a dark shape progressing up the back stairs to their apartments.  It’s not a dog.  It’s a coyote who is now existing in the City. Inevitably, Sad Sack Toby and Pitiful Pearl Melinda meet and begin to court the coyote.

There’s a third “character” not listed in the cast list, but essential to this fantasy. It’s Buderwitz’s set which begins as a simple platform with some informational projections by Tom Ontiveros.  It then expands in unexpected ways.  The first designer to impress me since the magic of The Company Theatre’s Russell Pyle, Buderwitz’s design drives the City to its knees and the fantastic business of transformation brings the story to its inevitable conclusion.  Additionally, Ms Azar is one of few actors we have ever seen who literally transforms before our eyes.

This is a tough ‘two hander’ (plus one) that offers a challenge for the actors as well as for the audience.  Leave your expectations at home and come to Pasadena to see something just a little bit different.  Truly, Fantastic.