FREE Inside the John Anson Ford 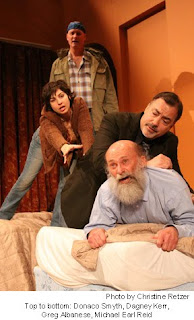 His childlike frantic fears stoked by the embarrassment of being different have driven him to distraction as his old pal, handler, colleague, Stoney Madonna (Greg Albanese) tries and tries again to convince Free that they can make a fortune by exploiting Free’s extraordinary talent. All Free wants is to be left alone and to be ‘normal.’ He is not interested in becoming “the stuff that dreams are made of.”

Free is confronted by a loopy woman, Althea (Dagney Kerr), who longs to learn to float. Free’s no teacher and though Althea seems determined to learn and they may even get a little lighter during the scene, which flies all over the room, the ground is still their final resting place.

Patsy (Jane McPherson), the maid who cleans rooms, is a voice of reason and befriends Free (who now insists that he be called by his given name, Marshall). She gets him a job helping with housekeeping at the motel, leaving poor Stoney without a meal ticket.

Properly harnessed, the energy generated in this production would electrify a city block for a week. Director Wendy Worthington’s tight direction is consistent and the cast delivers.

The metaphor of floating may have spiritual ramifications. The actual effect that the audience anticipates pays off and the metamorphosis of Free from an anxious little guy into a new more confident person is not really discussed in the exposition, but there are changes.. the characters do evolve which may be what the whole thing is about.