'greedy' at The El Centro Theatre 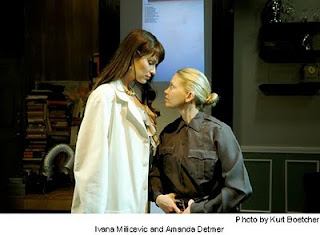 The Red Dog Squadron is a hearty band of serious actors dedicated to profes-
sional theatre.

Playwright, Karl Gajdusek, has crafted an oddly appealing, but somewhat confusing play. Set in the middle of a 144 day deluge, the audience hears the thunder.. or is it a bowling alley above the theater, as we enter past a zombie (of sorts) (Daddy played by Kyle Hamilton) who sports an empty baby carrier.
His yellow slicker, sunken eyes and depressed demeanor: a mannequin standing sentinel at the entry to the theater. Just before the play begins, Daddy meets Momma (Gemma Levinson) on the stage. They display newspaper headlines to one another that mention a mysterious baby that has been deposited in a local hospital. Another headline mentions 144 days of steady rain.

Kurt Boetcher’s excellent set is a stark contrast of life styles. Stage right is a dingy space with hundreds of books lining the walls, even blocking a door where the father of Louis (Brad Raider), an aspiring inventor and his sister Keira (Maggie Lawson), may still be entombed? We never meet the dad. Kiera is an unwelcome guest in her childhood home. Louis is supported by his butch security guard wife, Janet (the protean Amanda Detmer). Janet tolerates Kiera's visit… barely. Kiera has come up with a scheme to hustle a hundred thousand dollars from an unsuspecting doctor, Paul (Kurt Fuller), using an untraceable email address through a woman she’s met in Russia.

Plot unfolds cinematically with action moving from the dingy home to the crisp modern space where Dr. Paul and his Bosnian wife, Tatiana (Ivana Milicevic) discuss major issues they have. She is determined to have a baby and Paul avoids the issue by saying they just can’t afford to create a family. He’s been suspended from practice because of an unfortunate Good Samaritan move he made some time ago. Kiera's greed and the basic humanity of Paul play out in a scheme that takes some twists and turns that one must pay careful attention to fully appreciate.

An interesting use of a narrow space that divides the book lined walls of Louis and Janet’s home and the doctor’s upscale digs features a rear screen projection that creates interludes that include Paul driving in his car in the rain with a muffled GPS voice instructing him where to turn and other locations where the lives of all five of the main characters meet at one time or another. Momma and Daddy, the zombies in the yellow slickers, function as ghostly parents of the baby who, evidently, dozens of couples want to claim at the hospital where Janet is a security guard. They double as yellow slickered Kabuki koken, efficiently moving props and scenery.

Gajdusek’s script may challenge the audience, but under director James Roday’s mostly steady hand, the actors are all on the same page at the same time. This is a production worth seeing. The influence of the absurdists filters in. Perhaps a bit of Kopit? We never meet the father who has collected Nazi artifacts: his legacy to Louis and Kiera. Over all The Red Dog Squadron deserves an audience up for a challenging evening and ready to confront, perhaps, our own personal issues with greed.