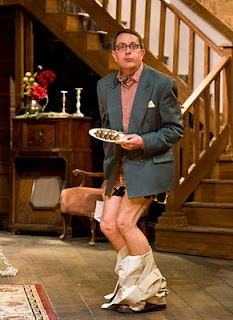 For a very limited time audiences will have an opportunity to see ensemble work that shines. A Noise Within revives their own production of Michael Fryan’s Noises Off!
(Stephen Rockwell as Frederick Fellowes as Philip Brent.
Photo by Craig Schwartz)
Noises Off! is an inside look at the workings of a theatrical road company, all drawn together under the aegis of actress / producer Miss Dotty Otley starring as the maid, Mrs. Clackett. (Dotty/Clackett played by the ever energetic ANW mainstay Deborah Strang). Nothing’s On!!!s director, (Geoff Elliott as Lloyd Dallas), is one of those guys who is busy, busy, busy with more than one project at a time, as well as romancing more than one company member at the same time. The first act of Nothing On!!! is in rehearsal at rise. It’s the dress rehearsal, though some actors think it’s the tech as we continue to stop and start with interjections from Dallas. They have only a few hours before opening and then heading out onto the road with their fishy comedy. It’s about sardines! Sort of.

Excellent production values and solid performances combine to make for an evening of fun that will be very meaningful to anyone who has ever been in a play. Garry Lejeune (Mikael Salazar) squires the delicious Brooke Ashton (very sterotypically blonde Abby Craden) into the home of the well to do Philip and Flavia Brent (Stephen Rockwell and Jill Hill) for a quick tryst.

At this point all I can do is praise the rest of the cast and Geoff and Julia Rodriguez-Elliott’s fine tuned direction. Lenne Klingaman’s Poppy the Assistant Stage Manager is delicate and true. Shaun Anthony’s Stage Manager Tim Allgood keeps the pace moving.. and Apollo Dukakis as doughty old Selsdon Mowbray as The Burglar is just wonderful.

One has to keep referring back and forth from the program for the play within the play (Nothing On!!! in Noises Off) to keep the names straight. However, as the mayhem builds, it really doesn’t matter and keeping track of the actual plot becomes inconsequential to the fun and watching the three ring circus of events; missed cues and attempted murder evolve.

A final note to the benefit of A Noise Within’s dedication to excellence is Adam Lillibridge’s amazing set (which the audience must stay through the intermissions to watch the Run Crew: Lillibridge, Bernice Mendez, Katie Elsaesser, Dough Milliron, Stefanie Demetriades and Karla Menjivar transform like clockwork. Twice!

New Season begins with Shakespeare, Tennessee Williams and Ionesco the end of February, 2011.
Posted by Sheehan at 1:11 PM

Email ThisBlogThis!Share to TwitterShare to FacebookShare to Pinterest
Labels: a noise within, Farce, los angeles theatre